Well, I made four “Damania” comics today and I’m really proud of how they all turned out too 🙂

As usual, these four comics are released under a Creative Commons BY-NC-ND Licence. 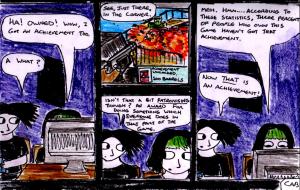 “Damania – Achievement” ended up being more cynical than I originally intended. My original plan was for Rox to point out to Derek that achievements are basically the modern equivalents of high scores, bonuses etc.. in old computer games. Then I thought of a slightly funnier ending. 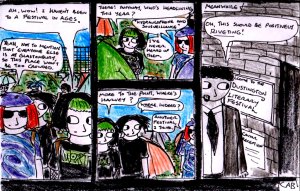 “Damania – Festival Arrival” is the beginning of a story arc which I’ll probably continue tomorrow. I’m quite proud of how this comic turned out, even if it was slightly rushed.

Oh, if anyone is interested, an old sketch of “Hydraulophone and Sousveillance” (a fictitious nerdcore rapper character I came up with in 2010) can be found here. 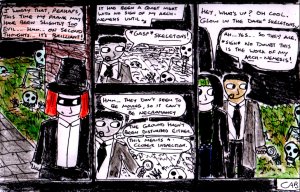 But, yeah, “Damania – Skeletons” is kind of a comic about the fact that whenever Harvey is alone, everything suddenly goes into B&W/greyscale, like an old detective movie. 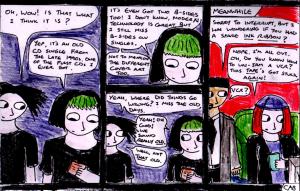 “Damania – Does Anyone Remember These?” By C.A.Brown

“Damania – Does Anyone Remember These?” was inspired by the fact that, quite a while earlier, I rediscovered some old CD singles (from the 90s and early-mid 00s) which had been sitting in my CD rack and gathering dust. Anyway, I suddenly realised that… well, people just don’t really make CD singles these days..