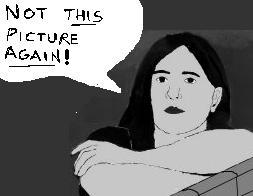 If you’ve ever seen a film called “Waking Life” (you really should – here’s the trailer) or another film by Richard Linklater called “A Scanner Darkly”, then you’ll have probably noticed the rather unique and highly realistic style of animation in these films.

This style of animation is created using a technique called rotoscoping (it’s used in some other animated films too) where the footage is shot on film and then each frame is traced over in order to provide each frame of the animation. Of course, producing any half-decent animation using this technique takes a lot of time, a lot of money and a lot of people.

However, if you just want to create static pictures in this style, then this can be done relatively easily using nothing more than Microsoft Paint, a digital photograph and a graphics tablet. Since I featured this drawing style in yesterday’s article, I thought that I’d show you how to use it.

(Be sure to make a backup copy of your digital photo before you rotoscope it. This is because this process will irrevocably change your photo. So, make sure you keep a second copy of it.)

(I should probably also point out that if you want to publish anything you make using this technique, then you need to either own the copyright to the photo you’re using and/or have permission to use it.)

For this tutorial, we’ll be using a small photograph of my hand (although, since my little finger is behind my ring finger, it looks like I’ve only got four fingers in this photo). This is mainly because it is fairly simple to convert into a rotoscoped image and it shouldn’t take you too long if you want to practice with this picture too. 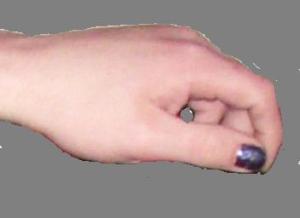 Firstly, you need to select a small area of skin and make a copy of it. Once you’ve copied it, paste it to an area of solid colour in your picture [so it can be easily covered over later]. This small area of skin will be useful later in the rotoscoping process. 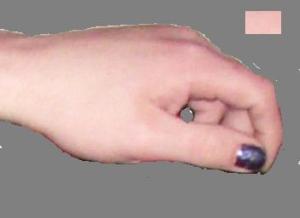 Once you’ve done that, select the pencil tool and go over any lines and/or edges in the photograph. In addition to this, you can fill in certain areas for a more “cartoonish” kind of look (in this case, my thumbnail has been turned from purple to black). After you’ve done this, it should look something like this: 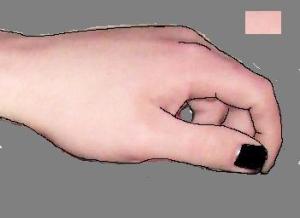 After this, you need to fill any areas inside these lines with a solid colour that contrasts easily with the background (white in this case). Since photographs don’t contain many areas of truly solid colour and are also often JPEG images too (which blurs everything very slightly), you probably won’t be able to use the “fill” tool in MS Paint for this.

So, you’ll have to fill it in by hand – this can be slightly time-consuming and it is one reason why a graphics tablet is so useful. It’s also useful to use the zoom function to find stray pixels too. 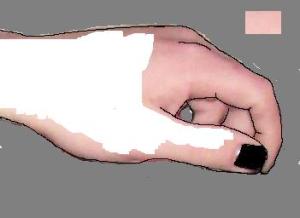 Once you’ve finished, the photograph should look something like this: 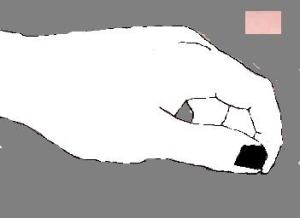 Now, all you have to do is to select the “pick color” icon (it looks like a pipette – at least in version 5.1 of MS Paint). Once your cursor has changed into a pipette, click on the small area of skin you copied at the beginning of this tutorial.

This will select the exact colour of the area (down to the exact pixel) and set it as the primary colour. Now, click on the “fill” icon and then click on middle of the hand.

Congratulations! You’ve done it! You should end up with something that looks like this: 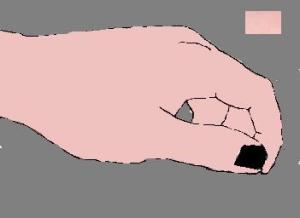 Of course, if you really want to show off, you can use the rotoscoped drawing as the basis for a small animation like this:

(Note: for file size reasons, the images in this tutorial are JPEGs [except for the animated GIF at the end]. However, if you want to use these images, then it’s a good idea to save them as Bitmap images after you’ve downloaded them and opened them in MS Paint [mainly because it’s a lot easier to fill solid areas of colour in Bitmap images using the “fill” tool in MS Paint].)

Anyway, I hope that this guide was useful 🙂

One comment on “How To Make “Rotoscoped” Pictures Using MS Paint”