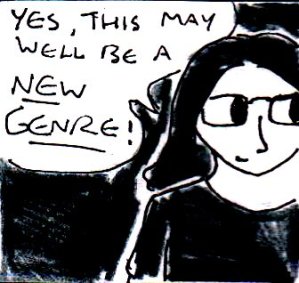 About a week or two before Halloween in 2010, I came up with an idea for a new genre of entertainment. Or at least I thought I did. It’s probably been invented before – I probably just came up with a new name for it.

I am, of course, talking about Stand-Up Horror. Basically, it’s like stand-up comedy, but instead of trying to make the audience laugh, the …I can’t really say “comedian”… performer tries to scare and disturb the audience with a variety of creepy stories and facts.

But, apart from using it as the inspiration for a drawing I made last August (which can be found here – Wow! My art looked really terrible back then!), I didn’t really do anything with this idea for various reasons.

For starters, the basic idea behind stand-up horror is nothing new. After all, it would basically be a glorified version of someone telling scary stories around a campfire and I guess that there have probably already been shows and performances which were “stand-up horror” in all but name. However, it has never really been seen as a “genre” as such in the way that “stand-up comedy” has (eg: when was the last time you saw a “horror club”?).

Secondly, I’d probably get a serious case of stage fright if I ever tried to give a stand-up horror performance. Ironic, isn’t it?

Anyway, I thought that I’d provide something of a guide to anyone who wants to put on a stand-up horror performance and has an interest in actually turning this idea into a real genre. The first person to actually do this may well end up becoming famous, since there seems to be very little like this out there at the moment.

Having had next to no experience in stand-up comedy (apart from one talent show ages ago when I was about fourteen), I’m nowhere near an expert on the actual mechanics of performing on stage and it might take some practice before you can come up with an act and a distinctive performance style that actually works.

But, what I can do is to give you a few ideas about three other things which might help your stand-up horror performance.

1) Stories: You’re going to need to come up with scary stories – stories which actually creep you out when you think of them.

Not only that, you’re going to have to write them in a way that you can remember (since reading from notes on stage is probably highly unprofessional) and in a way which works when you tell your story out loud. These stories should also be fairly short too.

Personally, I think that the best kinds of stories for a stand-up horror performance are the kind of vaguely realistic stories that have an “urban legend”-esque feel to them. The kind of almost realistic stories which your audience will listen to and think “that’s probably not true, or at least I hope it isn’t!”

Now, this doesn’t mean that you can’t include supernatural things in your stories, but it’s probably best to only hint at them or describe the after-effects of them and let your audiences’ imaginations fill in the gaps.

There’s a wonderfully disturbing blog I found a few years ago called “Saya In Underworld” [WARNING – This site will give you insomnia and/or nightmares] which is filled with Japanese urban legends and creepy stories. Whilst you shouldn’t copy any of these and you should come up with your own stories, the short stories on this site might give you an idea of the style of short stories which would probably work well in a stand-up horror performance.

2) Humour: First of all, any humour in your performance should be of the dark and cynical variety. And, despite the fact that it’s meant to be a horror performance, there should be at least some comedy in it. Trust me, there’s a good reason for this.

Back in the 19th century, before horror movies were invented, the closest thing that people could watch were Grand Guignol plays. I was lucky enough to see a recreation of three of these short plays at the Abertoir festival [NSFW] in 2009 and, even these days, Grand Guignol plays can still be as disturbing as any horror movie. Anyway, one of the really interesting things was that – out of the three plays – the one in the middle was actually a comedy.

So, by adding a bit of humour to your stand-up horror performance, you can actually make the disturbing parts of it even more disturbing.

3) Facts: To get a quick reaction, stand-up comedians have one-liners. Stand-up horror performers have disturbing facts. Yes, facts. Short and creepy facts which most people didn’t know and which will probably linger in your audience’s imaginations for quite a while.

So, where to find these facts? Well, there are plenty of books dedicated to strange facts out there, you might find the occasional disturbing fact in documentaries and then there’s also the internet. There’s no shortage of places to find disturbing facts. Hell, when I was a kid, I used to read a series of books by Terry Deary called “Horrible Histories” and these were absolutely crammed with all kinds of macabre facts.

However, I should point out that you should only use disturbing facts and not depressing facts. In other words, go for facts which will make your audience feel disgusted rather than facts which will just make them feel miserable about the world in general. Plus, it’s probably a good idea to avoid facts which make it look like you’re trying to make a political point too.

Good subject areas for disturbing facts include: death, insects, ancient history (eg: how the ancient Egyptians actually mummified people), rare and unusual diseases (eg: what the Ebola virus does to anyone who is infected by it), ancient weapons, historical methods of execution (eg: what actually happened when someone was “hung, drawn and quartered” in Tudor England) etc…

I should probably point out that if you are going to use any historical facts, then anything after about the 18th or 19th century may be in bad taste.

Yes, a lot of horrific things have happened in both the 20th century and in this century, but you shouldn’t use them to get a cheap scare out of your audience. This is because some of these things (eg: anything related to WW2) happened in living memory or very close to living memory.

Sorry that this guide is so short, but I hope that it was useful 🙂 if you actually want to put on a stand-up horror performance, then I wish you all the best of luck 🙂

One comment on “Stand-Up Horror – A New Genre? (And How To Perform It)”