Well, I produced two new watercolour pencil drawings for today (well, the second one is technically a single-panel comic), but neither of them really turned out as well as I hoped they would and they are best viewed at about a quarter of their original size.

Maybe this is a sign that I still need to give my imagination a break for a while and return to re-drawing my best old drawings for a bit longer?

As usual, these two watercolour pencil drawings are released under a Creative Commons BY-NC-ND licence.

“Nightmare City” By C. A. Brown

“Nightmare City” was an attempt at drawing/painting a random dystopic sci-fi scene. But, unfortunately, this painting ended up being slightly rushed and it didn’t really turn out as well as I hoped it would. 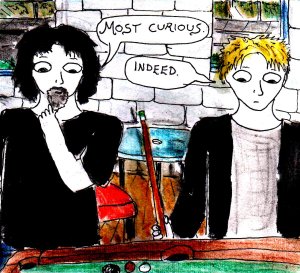 “Richs and Coates” is a drawing of two characters (Coates is the one on the left and Richs is the one on the right) that I originally came up with when I was about sixteen or seventeen for a series of ‘Sherlock Holmes’ parody stories I wrote at the time.

Interestingly, I actually wrote a new “Richs and Coates” story last May (set several years after the original stories) and it can be found here.

Well, another month and another “Best Of The Blog” post. In case you haven’t seen one of these posts before – it’s a handy collection of links to all of the articles (excluding reviews, art posts, drawing guides etc..) which I’ve posted over the past month.

– “Your Art Will Improve Without You Even Knowing It”
– “One Cool Trick From The Splatterpunks For Starting Your Horror Novel”
– “Do You Doodle A Lot? You May Be An Artist.”
– “The Best Revenge Against Your Critics (And A Mantra To Help You Do It)”
– “Should You Learn How To Draw Anime/Manga Style Art?”
– “Don’t Be Afraid To ‘Cheat’ With Your Art.”
– “Enjoy Your Epic Creative Moments”
– “One Sneaky Way To Beat Writer’s Block And/Or Artist’s Block”
– “Four Very Basic Tips For Writing A Good Prologue”
– “Why Copyright Terms Should Be Reduced To Twenty Years From Publication“.
– “Keep Your Art Fresh By Working In Different Mediums”
– “Four Ways To Tell A Re-Readable Story”
– “Copyright-Free/Public Domain Neon Graphics”
– “ A [Clueless] Rebuttal To Charles Thomson’s ‘The Art That Damien Hirst Stole’”
– ” What Can Music Videos Teach Us About Making Comics (With Examples)”
– “My Thoughts On Co-Writing”
– “One Essential Ingredient For Writing A Great Thriller Story (And How To Use It)”
– “Can Videogames Be Converted Into Other Formats (eg: Art, Fiction etc..)? ”
– “Feel Connected To Your Art Style By Drawing Fan Art”
– “The Story May Be Different, But The Emotions Are The Same.”

Well, for today’s instalment of my “How to Draw” series I thought that I’d show you how to draw a plaster.

Well, I’m still kind in the mood for re-drawing some of my best old art from 2012 at the moment (I don’t know, I guess that want to see what my “greatest hits” will look like as high-quality watercolours).

However, I also produced one new watercolour pencil drawing for today too … Well, a piece of fan art actually…

Note: Out of today’s three drawings/paintings, only “Magic Coin” and “Magic Coin (II)” are released under a Creative Commons BY-NC-ND licence. 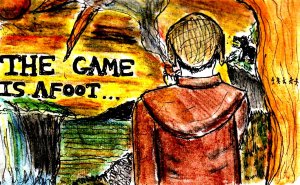 As you can probably deduce, “The Game Is Afoot” is a drawing of Sherlock Holmes.

Originally, I was going to show Sherlock Holmes walking around the gaslit streets of Victorian London but, after I realised that I’d drawn him wearing his famous deerstalker hat, setting this drawing/painting in the countryside seemed much more appropriate (after all, showing Holmes wearing a deerstalker in the middle of a city is a mistake which people make far too often).

I quite like this picture, although I’m annoyed that I only managed to include three references to Conan Doyle’s stories in it though.

“Magic Coin (II)” is a watercolour pencil redrawing of a drawing I made in August 2012 – one of my most creative months. Although this re-drawing is much better than the original on a technical level, I don’t know which version I prefer.

Anyway, here is the original, so that you can judge for yourself:

Well, it’s been a while since I last read a Lee Child novel. So, when someone lent me a copy of “Never Go Back”, it went straight to the top of my ‘to read’ list.

A couple of days later, I read the whole thing in one single sleep-deprived night.

Ok, it isn’t Lee Child’s best novel, but it’s hardly his worst either. Or, to put it another way, it’s good enough that you’ll probably want to read the whole thing in one sitting.

As with all of Lee Child’s novels, “Never Go Back” follows Jack Reacher – an ex-military policeman who wanders around America and almost always seems to end up in the middle of some mystery or other.

In “Never Go Back”, not only does Reacher find himself formally accused of manslaughter (due to an old case he worked on during his military police days), but he has also been drafted/recalled back into the army in order to allow the new temporary commander of his old military police unit (Colonel Morgan) to charge him with the crime.

Plus, on top of all of this, the officer who should have been in charge of his old unit (Major Susan Turner) appears to be missing…..

I probably haven’t done the novel justice in this short summary, but it’s a lot more thrilling and dramatic than it sounds. Well, after the first hundred pages or so, at least….

It may be because Lee Child is a famous author and can get away with this kind of thing, but I’ve never seen a thriller novel start so slowly. Yes, you might not notice this if you haven’t read any of the other “Jack Reacher” novels, but it has the slowest beginning in any of the Lee Child novels that I’ve read.

Don’t get me wrong, the first quarter of the novel isn’t boring or badly-written. It’s just very different in pacing and style to the first quarter of most of Lee Child’s other novels. If this was a novel by any other author, I probably wouldn’t even comment on this fact – but it’s, well, unusual for a Lee Child novel.

As for the characters, many of them are fairly well-written. Jack Reacher is still Jack Reacher (as the old saying goes “if it ain’t broke, don’t fix it”), but there are also a few interesting supporting characters too.

Yes, this is one of those novels where Reacher has a companion and a couple of other people to help him out too. I’m not sure whether I prefer these stories to the stories where Reacher is pretty much on his own, but having a few supporting characters works fairly well in this novel.

However, most of the villains (apart from possibly one of them) in “Never Look Back” aren’t really as well-developed as I hoped they would be. I can understand this for the generic “henchmen” characters, but we never really get to learn that much about the main villains of the story.

Yes, it’s explained why the main villains have done what they’ve done, but they never really seem like they’re real, well-developed characters (unlike, say, the villains in “Die Trying”, “The Visitor” and “Without Fail”).

I also kind of have mixed feelings about the plot of “Never Look Back” too. Yes, there are a lot of thrilling set pieces, intriguing mysteries and plot twists – but the ending to the novel just seemed slightly contrived and anticlimactic in some ways. I can’t really describe the ending without giving away major plot spoilers, but I was expecting something a lot more shocking, innovative and dramatic. Even so, all the action scenes, plot twists and mysteries are still compelling enough to make this novel worth reading.

Yes, “Never Look Back” may not have the best beginning and ending ever written, but the part in between these two things is absolutely spectacular.

If I had to give it a rating out of five, then it would probably get a four.

Well, for today’s instalment of my “How to Draw” series I thought that I’d show you how to draw a ruler.

Well, once again, one of today’s watercolour pencil drawings [ “Message (III)” ] is a re-drawing of one of my older drawings.

Even though I’m going against my own advice on this subject, all of these re-drawings are due to a combination of needing to give my imagination a break for a while and the fact that I also want to see what my “greatest hits” look like as high-quality watercolours.

Naturally, I’ll also include the previous version of this drawing for comparison too.

As usual, all three of these images are released under a Creative Commons BY-NC-ND licence.

“Galaxies” was mainly drawn/painted in order to practice drawing people in profile and I’m quite proud of how it turned out, although the background ended up looking less interesting and dramatic than I expected it to.

“Message (III)” is my second re-drawing of a drawing I originally made in July 2012 and I’m quite proud of how this version of “Message” turned out.

Since, although it doesn’t quite capture the gloom and greyness of the original, the lighting and perspective are a lot better than they were in either of the older versions of this picture. 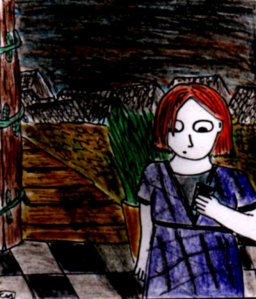 I drew “Message (II)” about a year ago and, even at the time, I didn’t really think that it was a particularly good re-drawing. So, it’s great to finally create a proper version of this drawing 🙂