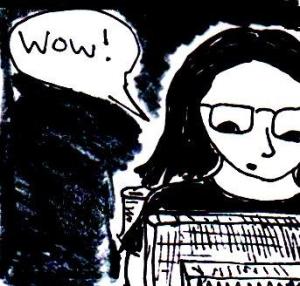 [Sorry that this is such a short and badly-written article. The article which was going to be today’s article ended up being a bit too cynical and I eventually ended up deleting it. This article is kind of a fairly quick replacement.]

Although I think I’ve mentioned this whole subject already in my article about emotions and creativty, something happened a while ago which made me think about this topic again.

A couple of weeks ago, I was watching a TV show that I really love on DVD and then, in a sudden flash of inspiration, I realised exactly why I loved this show so much.

Although the story of this show was extremely fantastical, the themes and emotions in it weren’t. I was more than familiar with at least a couple of them.

This is nothing new, in fact there’s even a word for it. That word is, of course, “catharsis” – which refers to expelling or exploring emotions through art, fiction and/or drama. But the thing which really caught me by surprise was, again, the fact that all of these emotions were “hidden in plain sight” in a rather unrealistic TV show.

Anyway, this made me think about emotions and storytelling again and about how you can use this technique to your advantage if you want to explore or expel your own emotions. After all, most of the best art and fiction is made with a lot of emotion behind it. But, at the same time, being too outwardly realistic with how you portray these emotions in the things you create might be kind of intimidating or off-putting – both to you and to your readers.

This doesn’t mean that you should shy away from exploring emotions which you really feel that you need to express, but it means that it might be a good idea to disguise them slightly. To make a story or draw a picture which is very different from anything you’ve experienced, but which still contains all of the same emotions.

One of the other advantages of concealing the emotional story you want to tell under the cloak of fantasy or science fiction is that, if your audience can’t relate to the emotions in your story, then they can still enjoy the surface of your story – the magic, the strange worlds, the robots, the spaceships etc…

So, what I’m trying to say is that, if you’re telling a story based on your own emotions, make sure that it’s a story rather than an autobiography. It may sound strange, but it’s a lot easier to be honest about your emotions in fiction than it is in non-fiction.

Not only that, your story may well help people to understand themselves (or at least help people to feel better) in a way which a more factual or “realistic” story might not.

Again, sorry that this article was so short and so rushed, but I hope it was useful 🙂