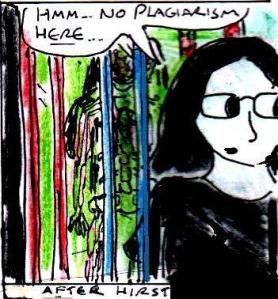 It’s true, technically this little drawing is a parody.

(Note [29/1/14] : When I wrote this article, I knew relatively little about the subject in question and, in retrospect, the only real purpose this article serves is as an example of how NOT to write a rebuttal.

The best and most informative part of this entire article is probably Thomson’s comment below it and it’s probably worth just skipping the article and reading that instead.

I’d also like to apologise to Charles Thomson about this article too, especially since the Stuckist Manifesto [which I only discovered a couple of weeks after this “rebuttal” was published] has a lot of very good ideas in it and is well worth reading too. If I’d known about Stuckism earlier than I did, then I probably wouldn’t have written this stupid article.)

Well, a few weeks ago, I read an article by Charles Thomson which I disagreed with. This is nothing new, I read articles that I disagree with on a surprisingly regular basis – but, since this article was about art, I thought that I’d write a rebuttal of sorts.

Even though I’m not really a huge fan of modern art, I feel that Damien Hirst has been unfairly maligned in this article. Not only that, it raises a lot of interesting questions about the thin line between inspiration and plagiarism (Disclaimer – I’m not a lawyer, so I can’t comment authoritatively on the legal aspects of any of this and none of this should be considered legal advice in any possible way).

If you don’t have time to read it, Charles Thomson’s article comes very close to accusing Damien Hirst of plagiarism, with quite a few comparisons of both Hirst’s work and the works of other artists. Yet, when I looked at the comparisons, I personally didn’t really see much (if anything) in the way of plagiarism.

Ok, I didn’t see a huge amount of originality either – but, in my opinion, there was just about enough originality in there for most of Hirst’s works to be considered his own (albeit heavily inspired and influenced by other works of art and other artists).

It seems to me that Hirst has just done what artists and writers have been doing since art was invented – namely, they’ve found an art style, an art technique or a style of image that they really like and then decided to make their own version of it.

In other words, I believe that Hirst was inspired by lots of different things (including, as Thomson’s article shows, a scientific supplies catalogue from 1992 of all things) but I don’t believe that he actually plagiarised anything. Why? Well, this is because, in many of the examples shown – Hirst mostly just seems be copying the style and the artistic techniques of the artists that have influenced him.

Yes, there are a few examples where both the original work of art and Hirst’s work contain the same subjects – but again, I would personally argue that this isn’t plagiarism. After all, there’s no rule that says that multiple artists can’t draw, paint or sculpt the same thing (eg: just think about how many painters have painted bowls of fruit or scenes from the Bible and Greek mythology over the years) – the only real rules seem to be about how they present the thing in question.

If they present the same thing in a different way (however slightly) then I personally don’t really consider it to be “plagiarism”.

And, in this regard, Hirst does something different to the artists that inspired him. Yes, he wasn’t the first person to bisect a pig – but he was the first person to suspend that bisected pig in a glass tank filled with formaldehyde (or formalin or whatever preservative doctors and morticians use these days).

In short, he took inspiration from something else, but instead of just copying it verbatim (like a plagiarist might do), he added at least a small amount of his own imagination, art style and creative thought to it. This, in my opinion at least, does not make it plagiarism.

I’ve written about this subject before but it’s a fact of life that good and innovative artists will go on to inspire and influence other artists. This isn’t a bad thing. Everyone learns from other people and everyone has their own role models. Of course, it’s always a lot better to be someone who inspires other artists, but there’s nothing wrong with being inspired by anyone – as long as you use your own imagination too.

Likewise, without people copying art styles and techniques(and adding their own unique touches to them), many art movements would never have come into existence. Artists have been borrowing from each other for as long as art has existed – however, there is obviously a difference between borrowing part of something else and adding your own imagination and just directly copying something.

On the whole, I’d argue that Hirst isn’t a plagiarist – he’s just been doing what most artists have done over the years. However, he’s been doing this in a slightly more obvious and very slightly less imaginative way than many other artists. But, saying that….

Out of the many examples that Thomson lists, there are one or two which I would personally consider to be something close to actual plagiarism. One of these is Damien Hirst’s “Spirit” where, although some text has been removed and the colours in the picture have been changed, it looks very similar to a Christmas card from the 1980s.

Not only that, the dove in the centre of the picture looks virtually identical. But, if Hirst painted the dove himself and it’s an accurate depiction of what a dove looks like when it’s flying, then I can’t consider this to be plaigarism. Even so, the two pictures do look remarkably similar….

Likewise, Hirst’s “Charity” looks fairly similar to the examples of old charity collection boxes which Thomson provides and it’s possible that Hirst might have actually used or re-created an old charity box for his sculpture. Even so, if he’s trying to make a point about charity or if he’s trying to change the context or meaning of the charity box, then this shows at least some original thought.

In fact, there’s even a word for changing the context or meaning of another image – it’s called a “parody” (in the general sense of the word if it’s comedic, but in the technical sense of the word [under American law at least] if it isn’t. Although the laws about parodies in the UK are slightly more blurry and ambiguous than they apparently are in America. Again, I am not a lawyer.) So, if “Charity” is making a point about charities, then I’d personally argue that it’s probably a parody rather than a plagiarised work.

All in all, I’d argue that the examples of Hirst’s work in Thomson’s article show a lot of inspiration and borrowing, but little to no actual plagiarism.