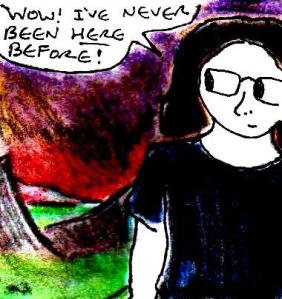 Ok, I had probably just temporarily run out of ideas or was just going through one of my usual occasional bouts of unenthusiasm, but as soon as I got some new stuff to try out, I suddenly felt more creative within the space of a couple of days.

The same was true when I got an old graphics tablet early last year (or very late the year before) too – whilst it took me a few days to get used to it and work out how to use it properly, I was a lot more creative for a while. After all, it was something new and fascinating which I had to work out how to use – it was, in effect, uncharted territory for me.

And, unlike exploring actual uncharted territory, the only possible danger was that I might produce a terrible drawing or painting. And, this happens every now and then anyway. So, what’s the problem?

Since I already know the basics of drawing, learning how to work in a new medium (eg: watercolor pencils) isn’t as intimidating as, say, learning how to play a musical instrument or learning capoeria or something like that.

To carry on with my metaphor from earlier – it may be uncharted territory, but I already have a 4×4, a satellite phone and a GPS locator. So, the process of learning how to work with watercolour pencils is actually surprisingly fun and, since it still involves drawing with pencils, I don’t feel like a complete hypocrite for my earlier comments about painting (I only feel mostly hypocritical LOL!)

Whilst getting new art supplies or trying to work in a new medium isn’t always a magic bullet when it comes to getting over artist’s block, it can work surprisingly well sometimes.

It’s probably best to get something which is at least vaguely similar to the medium which you already work in, so that you don’t feel completely lost when you start using it – for example, using watercolour pencils is fairly similar to using coloured pencils but it’s very different to what painting with actual watercolours would probably be like.

Plus, it’s usually a good idea to start with something fairly basic and inexpensive when you’re thinking of working in a new medium. The reasons for this should be obvious – but if you, say, spend a ridiculous amount of money on the highest-quality paints you can find and then find out that painting isn’t really your thing, then you’re going to be a lot more disappointed than if you just bought some cheaper student-grade paints to experiment with.

Not to mention that, at the end of the day, it’s your level of skill, experience and imagination that matters rather than the quality of your materials (unless you want your work to last for several centuries). I mean, Clive Barker could probably produce a much better painting with a £1 novelty painting set than a complete novice could produce with the most expensive paints on the market.

And, when you set out into the wonderfully fascinating uncharted territory of a new artistic medium, you might have imagination and a few transferrable skills – but you won’t have the experience. So, you may as well start with something basic until you’ve had a bit more experience.

Remember, as I said earlier, working in a new medium isn’t a magic cure-all for artist’s block or unenthusiasm, but it can work surprisingly well.

Anyway, I hope that this has been useful 🙂