[Note:I’ve only had the chance to play “Exhumed” for a couple of hours at the time of writing this review (although I’ve added to it since) – so this review mostly reflects my first impressions of this game. But, damn, did it make a good impression!]

One of the many old Playstation One games I got for Christmas was a game called “Exhumed”. Whilst I vaguely remember playing a demo of this game ages ago, all I really knew about it was that it was a fantasy/horror FPS game set in ancient Egypt.

Plus “Exhumed” was, of course, from the 1990s – the golden age of FPS gaming. Intrigued, I put the disc into my computer, loaded up ePSXe and started playing…. 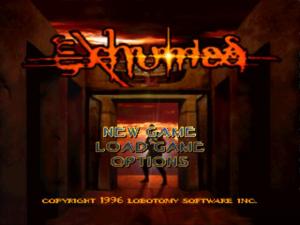 The story behind “Exhumed” is told thorugh both a brilliantly animated (for 1996 at least) introductory cutscene and through shorter cutscenes during the game.

The story begins when mysterious evil creatures start appearing in various old ruins in Egypt. These creatures have started mummifying people alive and stealing all manner of ancient treasures, including *gasp* the sarcophagus of King Rameses! The fiends!

A squadron of soldiers is sent in to destroy the creature, but there are problems with the helicopter and you, a nameless solider, are stranded near an old building – armed with only a machete.

After you’ve fought your way through the first level and picked up a revolver (for some reason, I absolutely love revolvers in FPS games), you reach a tomb. But this isn’t any old tomb. It’s the tomb of King Rameses, whose spirit suddenly appears before you and gives you a mission.

Rameses tells you that these creatures have stolen his body in order to extract his god-like powers from it. But, by doing so, they have torn his spirit for the afterlife and trapped it on Earth. He tells you that, in order to restore him to his rightful state of godliness, you must travel through the land and recover six stolen magical artefacts….

One of the very first things you will notice after completing the introductory level is that this game has a good old-fashioned world map – just like “Doom” (why can’t more FPS games have these?):

However, unlike in “Doom”, you can actually choose which level you travel to. Although you can only travel along a single linear path early in the game, once you find your first artefact in the third level (a pair of magical sandals which allow you to jump higher), you can return to the second level and access a raised area which is impossible to reach without the sandals. Once you’ve found this area, you will find a second exit, which allows you to travel upwards to the fourth level. 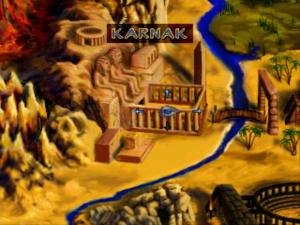 Just like “Super Mario World”, “Commander Keen” and all the greats, the world map is also the level select screen 🙂

This is, quite simply, amazing! Although hub levels and non-linear level progression are nothing new in FPS games (“Hexen” and “Quake II” spring to mind for starters – take note that both of these games are also from the 1990s), they are far rarer than they should be and seem to be almost non-existent in modern FPS games. Whilst this means that you will have to play through the second level about three or four times, this never gets boring or frustrating due to the fact that you get to explore new parts of the level each time you revisit it.

Yes, as befitting a game set in the ruins of ancient Egypt, you will need to do a lot of exploring. Like with all 90s FPS games, the levels are refreshingly non-linear and you will occasionally actually have to use your brain (or check a walkthrough) in order to work out where to go next. However, the levels aren’t frustratingly complex and you can usually work out what to do and where to go after a few minutes.

[Edit: Having played this game a bit more since first writing this review, the earlier levels are significantly easier than some of the levels slightly later in the game. The “Amun Mines” level in particular practially requires a walkthrough!]

One interesting feature of this game is that it contains destructable walls which can be destroyed by shooting the explosive barrels in front of them – these vary in design somewhat from level to level (eg: they are burning skulls in the first couple of levels). Sometimes you might get stuck (as I did in the very first level) until you realise that a wall is actually destructible. Whilst this feature isn’t quite as cool as the destructable walls in “Duke Nukem 3D”, the explosions are suitably dramatic:

Although I’ve only played about four or five levels and found two weapons, what I’ve found so far is incredibly impressive. As well as your basic machete, you will quickly find a revolver – which makes a refreshing change from the generic pistols found in most FPS games. This functions, as you may expect, as your basic pistol and you’ll probably only really use it until you discover the next weapon. A shotgun? No, it’s something much cooler….

Yes, that’s right! You get a heavy “M60” machine gun as your second weapon! The fact that “Exhumed” doesn’t follow the same basic and generic template that most FPS games do (eg: pistol, then shotgun, then machine gun, then rocket launcher etc…) is incredibly refreshing. Not only that, but this gun sounds and looks as dramatic as you would expect it to too.

[Edit: Having played the game a bit more since writing this review, I’ve also found grenades and a flamethrower. The grenades can also be used to destroy destructable walls and the flamethrower looks amazingly good, although it burns through ammo surprisingly quickly]

Although there is only one type of ammo pickup in the entire game (blue “weapon power” orbs), this will only replenish the ammunition of the weapon you are holding when you pick it up. This is an absolutely brilliant system since it lets you choose which weapons you wish to reload every time you find some ammunition and, since you don’t just have one pool of ammunition for all your weapons (which I kind of expected when I first saw this game), you’re less likely to run out of ammo either.

The aiming system in this game is kind of strange since, when it comes to firing at smaller enemies (such as scorpions) who are on the same floor as you, the game uses a “Doom”-like horizontal-only aiming system. However, when it comes to flying enemies (eg: hawks and giant hornets) or enemies which are standing on raised platforms, you have to jump whilst firing (which can sometimes lead to wasting large amounts of ammo trying to hit things). This takes a little bit of getting used to, but it’s good to see such a simple aiming system in a console FPS game. 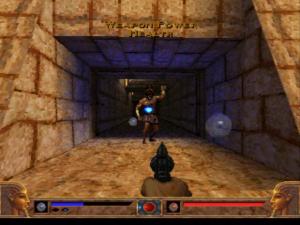 Being an old console game, the saving system isn’t quite as good as those found in PC games of a similar age. You can only save at the end of each level, but this is partly made up for by the fact that the save points look like camels. Although you don’t get to see it, you actually ride a camel between the various levels – although it’s only a small touch, it adds a lot to the immersive atmosphere of the game:

Well, it’s better than a boring old button at the end of every level….

As for the level design – although the game is set in a single location and a couple of the early levels look fairly similar, the level design never quite gets boring or repetitive and there are a fair variety of wall textures, sprites and locations:

… or this historically-accurate pool of green slime.

In additon to this, there are also occasional platforming sections in this game too. Whilst I’m usually kind of wary about platforming in FPS games, these sections are fairly well-designed and have a generous margin for error. Yes, you’ll probably die if you miss a jump – but due to the size of the plaforms and the spacing between them, you probably won’t miss [Edit: At least in the early levels anyway…]. 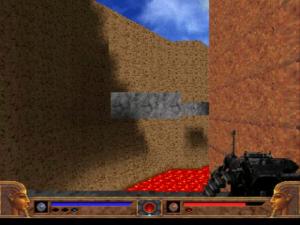 Interestingly, the Wikipedia page also points out that this game was called “PowerSlave” in America after the amazing song by Iron Maiden. I honestly don’t know why this game was retitled in Europe, let alone in Britain ( the country which this amazing band comes from, no less! ). But, as an Iron Maiden fan, the idea that “Exhumed” could have been at least partly inspired by one of their albums just makes it even cooler…

All in all, “Exhumed” is one of the best, if not the best, console FPS games that I’ve played. Not only is it an incredibly fun and well-designed FPS game, it’s also incredibly innovative too. If, like me, you’re a fan of classic FPS games, then you will probably love “Exhumed” and, if you’ve only ever played modern FPS games, then it might be worth taking a look at this game to see what you’ve been missing….

From what I’ve played so far, if I had to give “Exhumed” a rating out of five, then it would get six.