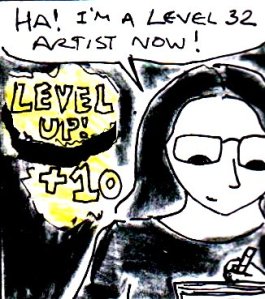 I may be a level 32 artist, but this little sketch certainly isn’t…

Yes, we all know that it’s important to practice creating art as regularly as we can. But, let’s face it, sometimes it can get a bit dispiriting if you’ve been practising regularly for quite a while and you still don’t feel like you’ve improved at all.

The fact is, you have improved. Yes, it may only be by a tiny amount, but you’ve improved.

It might just be that you’re a little bit more confident than you used to be.

It might be that your pencil lines are very slightly sharper and more precise than they used to be.

It might be that you’re very slightly better at mixing or blending colours than you were a few weeks ago.

It might be that you’ve worked out how to draw something which you didn’t know how to draw a couple of years ago.

It might even be that you’ve discovered a new effect you can use in the digital image editing program you use.

It could be one of a million things, but if you practice regularly, then it’s a proven fact that you will improve. Yes, you might only improve slightly once in every three or every ten pictures you make. It doesn’t matter. You’re improving.

Even if you don’t notice it at the time. It all adds up.

Think of it like playing a RPG-style computer game or videogame. If you’ve never played any of these games before, many of them use an “experience” system to determine how powerful your character is and what abilities they have.

Every time that you win a battle or achieve something, your character gains some experience points (or EXP). Once you reach a certain amount of EXP, your character will improve by one “level”. Once you’ve reached a higher level, your character has slightly more stamina, more powerful attacks, stronger magical powers etc… than they previously did.

This may not seem like much – especially at the beginning of the game when your character is only Level 1 and spends most of their time fighting rats and spiders with a wooden stick (and only gaining a couple of experience points for winning every battle).

But, after a few weeks of playing the game every day, your character will probably be an almost invincible Level 152 warrior with some kind of ridiculously sharp mythical ancient sword and the ability to fire lightning bolts out of their eyeballs.

Yes, you may have only gained a few EXP every day. But, over enough time, it all adds up to something spectacular.

The same is true when it comes to practising your art.

I mean, why do you think that most RPG games use the EXP system for character development? It’s because it mirrors the experience of practising something over a long period of time. It rewards the player for playing regularly.

Yes, with something like art, it might take months or years before you notice any dramatic improvements. But they will happen if you keep practising.

If you don’t believe me, then take a look at this collection of self-portraits I drew between June 2009 and January 2014 (this was originally a collection of thumbnails in the “DeviantID” category of my DeviantART gallery, but I’ve re-arranged them into chronological order and changed the background):

Click on the picture to view a larger version of it.

Yes, it’s taken almost five years, but the difference is quite surprising.

So, even if you think that you’re art isn’t that good at the moment, keep practising. It may take a few years, but you’ll eventually surprise yourself.

Anyway, I hope that this article was inspirational 🙂

What are you doing still reading this? You should be practising…