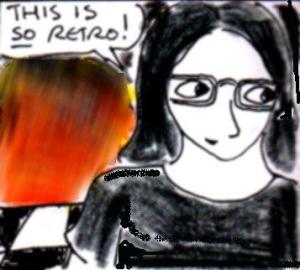 [Note: This article will mainly be about art, but some of the stuff in here can be applied to writing too.]

If you’ve been writing or creating art for a while then, chances are, you’ve moved on from whatever you were using when you started.

Whether it was writing stories out by hand before you typed them on the computer (I used to do this until I was about eighteen) or working primarily in one art medium before moving on to another similar one (eg: going from using coloured pencils to using watercolour pencils earlier this year), if you’ve been creating for a while then you’ve probably upgraded your tools or techniques.

Well, sometimes, it can be interesting to go back to using the things you used to use just for the sake of it. I don’t know why, but this is interesting on so many levels.

At first, it will probably feel strange and cumbersome and you’ll probably think something like “how the hell did I used to work like this?” but, after a while, it will suddenly feel wonderfully familiar and intuitive again.

If you’re only just starting to understand how to use a new creative medium or technique, then doing things the old-fashioned way for a short amount of time can help you feel more confident by reminding you that you already have all of the basic underlying skills (eg: storytelling, drawing etc…) you need – even if you don’t quite know how to use them in your new medium yet.

Not only that, if you’ve been working in a new medium for a while, going back to the old medium for a while is also interesting since you can apply everything new that you’ve learnt to your old creative medium. Trust me, there is nothing more satisfying with producing something amazing in an art medium which you’d previously considered to be “old” or “primitive”.

In addition to this, briefly doing things the old-fashioned way helps you to see your creative career as a whole. It gives you a sense of how much you’ve progressed over the years and, more importantly, it may well make you wonder what the next step on your creative journey will be….

And all of this stuff I’ve mentioned doesn’t just apply creativity too….

Although this article was partly inspired by producing a coloured pencil drawing called “1996” a few days ago (which, due to the scheduling differences between my blog posts and art posts, won’t actually be posted on here until the 28th) – if I’m being honest, the main inspiration for this article was actually a certain classic 1990s computer game called “Doom“.

I’m so used to playing “Doom” with modern source ports (which make it behave more like a modern game) that, when I randomly decided to run the original game using DOSBox , I found that I was terrible at it. The graphics looked blurry and the keyboard-only controls felt awkward and limited. I thought “How did I even play this game when I was younger?”

But, in less than an hour, I was playing as well as I usually did and I felt like I was seventeen again (which was a strange experience). Now I’m not sure which version of “Doom” I actually prefer LOL!

Anyway, it’s worth “doing things the old-fashioned way” every now and then. You might surprise yourself.

Sorry that this article was so short and sorry about the random ramblings about computer games too, but I hope that it was interesting 🙂

One comment on “Try Creating Things The Old-Fashioned Way”