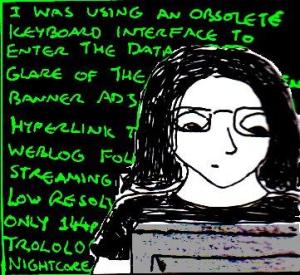 Although it’s been quite a while since I wrote anything even close to proper cyberpunk fiction (although I made a badly-drawn cyberpunk comic last year), it’s still a genre that has had a huge impact on my writing.

Ever since I read William Gibson’s “Neuromancer” when I was about nineteen (after trying, and failing, to read it when I was seventeen), my fiction has never quite been the same since.

Anyway, cyberpunk stories usually have a fairly distinctive narrative style and atmosphere to them which can be hard to replicate if you’re new to the genre. So, I thought that I’d provide you with four basic tips which could come in handy:

1) Assume that your readers already know everything: If you were writing a story set in the modern day, you wouldn’t spend a whole paragraph describing what a laptop computer was – would you?

No, you’d probably just write something like “Jane picked up her laptop, opened it and started typing an e-mail”. After all, everyone knows what a laptop is and what e-mail is.

Now imagine that someone from 1954 read that sentence, would they understand it?

In fact, they probably would. They might not know what a laptop looks like or even what an e-mail is – but they would see the words “typing” and “mail” and get the general idea of what was happening. But, most of all, they would get the sense that the sentence had been written in the future because the writer didn’t take the time to explain anything and just assumed that the readers would know what they are talking about.

It is a good idea to do this with at least some of the fictional technology in your cyberpunk story. Don’t give long explanations about what a piece of technology is, but leave enough clues (eg: by showing what people do with it, the context in which it is talked about etc…) for your readers to work it out for themselves.

If you need another example, here’s an extract from an unpublished cyberpunk novella I wrote In 2010 called ‘Ephemera’. Even though I don’t explain what a “NeuralNet search bot” or a “Dextek quantum-server” are in this extract, you can still probably get a very good sense of what they do and how they work just from the context in which they’re mentioned:

“‘Yeah, I used a NeuralNet search bot. I set it to “Synaesthetic”, so it
found even the stranger connections. You’re right, Dillinger has done this
before. Twenty-five times actually.’
‘Edited highlights?’
‘Gary Blaze, 24, died last October after the tamper-proofing on an
illegally-acquired Dextek quantum-server blew. The police found no evidence of tampering at the crime scene. His surfing records were encrypted but the forum logs show that his last chat session was with someone called “Border_Borden_I”.’

2) Information overload: It’s kind of hard to describe how to do this well, but well-written cyberpunk novels have a habit of bombarding the reader with more information than they can process – but they do this in a way which never feels clunky or boring.

Some of this information is just trivial background stuff and some of it consists of descriptions of what the main characters are doing in cyberspace, but it’s written in an absolutely fascinating way (eg: don’t describe anything that doesn’t make your readers feel curious or anything which isn’t actually interesting) and it’s fired at the reader at a pace that they can barely keep up with.

I guess that the reason why this works so well is because it mirrors the experience of looking at things on a futuristic version of the internet. I mean, even today, if you look at the average website – then you will be bombarded with advertising, links to other sites, pictures etc… in a way which would have been unimaginable to anyone reading a magazine or a newspaper thirty years ago.

3) Corporations: Cyberpunk stories usually involve large and powerful technology corporations in some way or another. Since cyberpunk stories are set in a future where technology is even more central to how the world works than it already is, then it makes sense that the most powerful people will be the people who actually make and sell that technology.

Of course, this also has other implications for your story. After all, if the most powerful people in the world are corporations rather than governments (and, yes, I know that this may well already be the case with the modern world) then they probably wouldn’t have been elected by anyone or be accountable to anyone. In fact, they would probably care more about profits and power than about things like the law, morality and democracy.

In other words, the world that your cyberpunk story is set in probably won’t be a particularly egalitarian or democratic place. Not to mention that there will probably also be a lot more advertising in it than there already is in the world.

4) Hackers: Like how the protagonist of a fantasy novel is often a witch, mage, sorcerer, necromancer etc… It’s pretty much an unwritten rule of cyberpunk fiction that the main character of a cyberpunk story should be a computer hacker of some kind or another (usually with a cool-sounding name like “Case” or “Trinity”).

One of the many reasons why cyberpunk novels usually have hackers as their main characters can be found in the name of the genre itself. Cyberpunk. Yes, as well as being the futuristic equivalent of a magician – in a world controlled by technology and technology corporations – a hacker is also the ultimate rebel (well, actually a luddite is the ultimate rebel – but unfortunately they don’t usually make good cyberpunk characters).

And, well, anything in any genre with “punk” in the title should include at least a little bit of rebellion.

Of course, you don’t have to know anything about actual computer hacking (and you probably shouldn’t) in order to write a convincing hacker character. After all, if you’re making up the highly-advanced technology in your story, then you can make up ways for people to hack into it too. As long as it sounds dramatic, complicated and suitably technical then realism isn’t an issue.

One comment on “Four Basic Tips For Writing Cyberpunk Fiction”