A detail from a copy/parody I made of Francesco Hayez’s “Odalisque With Book”
[Ok, I’ve resized and self-censored this image slightly. Since it was WAY too large and I’m not sure if the original image fitted into WordPress’s rules about nudity – I mean, it didn’t actually show anything, so I’m probably just being paranoid here…]

It’s a pretty well-known fact that one of the best ways to learn how to draw and/or paint is through lots of copying. Traditionally, students (whether they’re at an art school or, like me, teaching themselves) are told to copy old paintings.

This might all seem a like an old-fashioned and drearily formal way of learning how to draw or paint. But, I’ll let you in on a secret…

There’s much more to copying old paintings than just teaching yourself how to be an artist.

Before I go any further, I should point out that I’m obviously talking about copying pictures the old-fashioned way rather than just tracing them (because, as I’ve mentioned before, the only person you’re cheating when you trace something is yourself).

This also isn’t an article about how to copy things – it takes quite a bit of practice to learn how to do this. Plus, to paraphrase an excellent book called “Drawing On The Right Side Of The Brain” by Betty Edwards, it also requires knowing how to look at things in the right way. Still, if you keep practising, then you will get better at it.

So, although I’m not going to tell you how to copy things here, I will give you four lesser-known reasons why you should practice copying old paintings.

1) You can show off: One of the great things about copying old paintings is that, at the end of it, you have something which looks very much like a famous old painting. And, best of all, you’ve painted or drawn it.

Not only that, copying old paintings also makes you look surprisingly cultured too. It makes it look like you have a wide knowledge of art history and are a “serious” artist. Yes, you can just search for old paintings on Google or Wikipedia (preferably Wikipedia, since each image on there contains a listing of it’s copyright status too) and just copy anything that looks interesting enough – but you don’t need to tell anyone else that…..

2) You can change things: The coolest thing about copying old paintings is that you don’t have to be accurate if you don’t want to. If you’ve been practising drawing or painting for a while, then you can use these skills to make your copy into something which you think looks cooler or more interesting than the original.

For example, here’s a fairly cartoonish copy of the Mona Lisa I made in January which has a much darker and more gothic background than the original painting did: 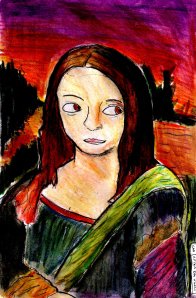 Not only that, you can also make parodies of the original painting, you can make “modern” versions of it etc.. The possibilities are endless.

One of the great things about old paintings is that so many of them are almost photo-realistic. But, at the same time, they’re slightly simpler than the average photograph and they’re often staged/composed in a very dramatic way – with the most important parts of the painting in the foreground.

As such, they’re slightly easier to copy than photographs or real life and, more importantly, they’re a lot easier to simplify too.

Knowing how to simplify complex images (whilst still keeping the “essence” of the original image) is one of the most useful skills that any artist can learn. Once you know how to simplify things properly, then you can copy pretty much anything that you want to relatively easily.

4) You can flog them if you want to: As long as you don’t try to pass your copy off as an original (since this would be illegal forgery and/or fraud), then it’s perfectly legal and acceptable to sell your copies if you want to. In fact, some people even make a living from doing just this alone.

After all, old paintings aren’t covered by copyright (as long as the original painter died at least 70-100 years ago) -so you don’t have to pay any royalties or get permission from anyone.

As a general rule, if you’re going to sell a copy you’ve made – then you need to acknowledge the original painter. Although the original painter is dead, an acknowledgement makes it clear to everyone who sees your painting that it is a copy and not an original. So, at the very least, no-one can accuse you of art forgery.

The usual way to do this is just to add a small note to a corner of your copy which says “After [original artist]”. Even if you don’t plan on selling your copies, then it’s usually good manners to do this anyway.