Well, a couple of weeks ago, I had a sudden interest in art nouveau for some reason. From the limited examples I’d seen of this style before (eg: the most famous Tarot deck – the Rider-Coleman-Waite deck is illustrated in this style and I’m a fan of Pamela Colman Smith’s art too), I knew that this was a pretty cool style.

But, I didn’t realise how much of an amazing style it was until I looked at it in slightly more detail – from dramatic Eugène Grasset pictures to some of Gerda Wegener’s more NSFW offerings (seriously, along with Kiki De Montparnasse and Pamela Colman Smith, she was one of the coolest people in the early 20th century. She was also pretty ahead of her time too.)

But, what’s more, I realised something else too….

My current art style, or at least what I hope it will eventually evolve into, looks a bit like art nouveau. Seriously, I can look at art nouveau pictures and wish that I’d drawn them or, dare I say it, I can even see some of my artistic future in them.

They have exactly the right blend of cartoonish simplicity and artistic complexity that I love so much. They’re very stylised, but also very realistic too. Not only that, they have a certain poetic otherworldliness to them too.

Not only that, manga has been an influence on my art style [even though I don’t usually draw manga – see this article for my thoughts on the subject]. Manga, of course, was influenced by traditional Japanese Ukiyo-e art (which I absolutely love too). And, well, Ukiyo-e prints also influenced many 19th century and early 20th century art nouveau artists too.

So, in a very roundabout way, my art style was probably already influenced by art nouveau (or at least had a couple of things in common with it) without realising it.

No wonder I saw a tantalising glimpse of my artistic future when I looked at some of these art nouveau pictures. No wonder many of them looked totally new, but also oddly familiar at the same time. Unknowingly, I’d stumbled onto a part of my imagination that I was only barely conscious of before.

After all of this, I just had to try to paint something vaguely art nouveau-esque and I ended up producing a large A4-sized picture called “La Reveuse”, which I’ll post here on the sixteenth. In the meantime, here’s a detail from it: 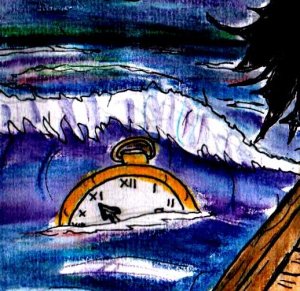 This little detail was probably also inspired by Dali, Hokusai and Bougereau too.

If you are an artist, then it’s a really good idea to look at other types of art. Not only will this broaden your imagination and expose you to new ideas, it may also help you to learn more about the hidden history of your own art style. It might also help you to tap into your artistic “subconscious” and see what surprising things are in there.

These days, you have no excuse not to at least take a quick look at other types of art. Whilst, a few decades ago, you’d have to buy expensive art books or spend quite a bit of time and money travelling to galleries across the world. These days, if you want to check out an art style you’ve never really looked at before, then it’s as simple as looking on Wikipedia (especially for older art) or just doing a Google image search.

So, what are you waiting for?