Well, I was still kind of in the mood for doing something different when I made today’s painting. So, I thought that I’d try to make a “traditional” watercolour pencil painting without using ink. Although this turned out fairly well, it didn’t really look quite as good as I’d hoped it would.

Well, it’s the end of the month and that means it’s time for another “Best Of The Blog” post 🙂

To my new readers, this is a monthly feature where I give you a list of links to all of the articles (excluding reviews and art posts) that I’ve written over the past month.

All in all, this has been a surprisingly good month and I’m really proud of most of the articles I’ve written for this month. Stay tuned for more next month 🙂

– “Three Ways To Avoid ‘Spectacle Fatigue’ In Your Stories And Comics”
– “People Look For Answers In Fiction. Give Them Some.”
– “Three Tips For Inventing Fictional Sports”
– “Why Do I Use A Creative Commons Licence?”
– “The Pros And Cons Of Making An Autobiographical Webcomic”
– “Approach Your Art With Curiosity (Plus An Exclusive Animation Too)”
– “Look Backwards For Inspiration”
– “How To Turn Photos Into Fake Pixel Art Using MS Paint”
– “The Gates Of The Imagination”
– “Five Ways To Make Zombies Scarier”
– “Seven Signs That You Might Be An Artist (Comic)”
– “What Are The Limitations Of Your Art Style?”
– “Making ‘Accidental Comics’”
– “Four Reasons NOT To Start A Webcomic”
– “Four Subversive Ways To Get Teenagers To Read More Books”
– “Feeling Blocked? What Are You Censoring?”
– “Three Ways To Combine Sci-Fi And Fantasy (With Examples)”
– “On Making Unusual Things Ordinary In Your Stories…”
– “Six Reasons Why Books Are Better Than TV Or Film”
– “Don’t Be Afraid To Change Your Creative Ambitions”
– “Three Ways Writers And Artists Can Use The Power Of New Things”
– “Three More Ways To Keep Your Art Fresh (With Examples)”
– “Why Simple Word Processors Are Awesome”
– “Why You Shouldn’t Try To Be The Next [Insert Famous Writer Here]”
– “Two Interesting Questions That Sci-Fi And Fantasy Writers Should Ask Themseleves”

Unfortunately, today’s painting didn’t really turn out very well 😦 It was, as you might have guessed, inspired by seeing two teaspoons in the sink and thinking “hmm… that looks like a good subject for a painting“.

The perspective in this picture probably isn’t exactly right and, despite spending about twice as long as usual adjusting the brightness/contrast levels of the picture after I scanned it, it still ended up looking drab and faded. Still, it was interesting to try something slightly different to my usual kinds of painting.

I can’t remember where I first saw or heard this term, but I thought that I’d talk about “spectacle fatigue” today. All it really means is when your audience becomes bored or less impressed with spectacularly dramatic scenes in a comic, movie, game or novel.

I’m sure that you’ve probably experienced this yourself when watching one of those mega-budget special effects tech demo movies that Hollywood likes to churn out these days. When you start watching the film, you think “wow! That looks cool!” and, by the end of the film, the flashy multi-million dollar special effects just seem kind of “ordinary” and slightly boring.

1) Pacing: This one should be pretty obvious, but you should treat your “spectacular” scenes in the same way that good writers treat fanservice and profanity. In other words, less is often more. One well-placed four-letter word or risque scene can have far more dramatic impact than a hundred carelessly-placed ones. The same is true for “spectacular” scenes too.

So, make sure that you leave a reasonable gap between your “spectacular” scenes so that they they don’t become “ordinary”.

2) Don’t rely on spectacle alone: This is a mistake which mega-budget Hollywood movies make all of the time – because they have a large SFX budget, they think that they can keep their audience interested by just throwing flashy special effects at them on a regular basis.

This might work for some people, but it’s quite telling that most of these mega-budget movies don’t have a cult following in the way that many lower-budget TV shows do.

The same holds true for comics and fiction too – yes, you can get away with adding lots of action and explosions to your story if it’s backed up by a fascinating story, good writing and interesting characters. This way, even if your audience becomes bored with all of the constant action in your story, then there’s still plenty of other stuff there to keep them reading.

3) Emotions: This is probably the best way to avoid “spectacle fatigue” in your story or comic. Basically, in order for a spectacular scene to really impress your audience, there needs to be some emotion behind it.

Yes, you can possibly get away with one or two “emotionless” spectacles in your story. But if you want your dramatic scenes to be consistently dramatic, then you need to make sure that they evoke emotions in someone, even if that someone is just one of your characters.

Sorry for another short and basic article, but I hope it was useful 🙂

Well, for some random reason, I felt like making a painting of Jadzia Strange for today. Although I don’t really plan on making another comic about her, it was kind of fun to re-visit this old character again. 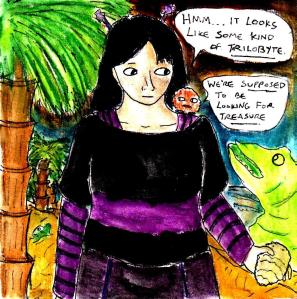 Well, I was watching an episode of “Stargate SG-1” recently, when I suddenly realised something quite interesting about storytelling which I thought that I’d share with you today, in case it’s useful.

In case you’ve never heard of “Stargate SG-1” before, it’s an American sci-fi show from the late 1990s and the 2000s about a top secret military team who use a wormhole-generating piece of alien technology (called a “Stargate”) to travel to a whole variety of different planets. It’s a really fun show.

Anyway, I was watching an episode from season two (called “The Fifth Race”) which involves one of the main characters (O’Neill) accidentally finding an alien device that downloads copious amounts of extremely advanced knowledge into his brain.

What makes this episode of “Stargate SG-1” so compelling is that, whilst most of the knowledge O’Neill suddenly gains is mathematical/technological, it’s also implied that he learns things like the meaning of life too.

For some reason, this made the episode even more dramatic and fascinating than usual. Of course, the episode doesn’t tell us what the meaning of life is – but it reminds us that nobody truly knows what it is (although there are obviously a lot of theories) and it tantalises us with the idea that there’s actually a definitive answer to this question.

And, well, this made me think about the role of questions and answers in stories. Although fiction is obviously fictional, it can tap into our desire for answers to a whole range of profound and currently unanswerable questions (eg: What is the meaning of life? What happens to our consciousnesses after death? Are we alone in the universe? etc…)

Many years ago, most people looked to religions for answers to some of these profoundly timeless questions (and many people still do). But, of course, every religion has at least slightly different answers to these big questions and even religious people might not always quite believe their religion’s “official” answers to these unanswerable questions.

So, where does fiction come into this?

Well, if there’s one thing that’s slightly better than not knowing the answer to an unanswerable question, it’s knowing a well-constructed fake answer to that question. And fiction can provide these fake answers to people.

For example, we haven’t found any evidence of intelligent extraterrestrial life and it’s very much possible that we’re completely alone in the universe. But, science fiction is one of the most popular genres of fiction because it shows us the possibility that there might be aliens out there and gives us an idea of what they might look like.

If we ask ourselves “are we alone in the universe?”, science fiction stories can provide us with a whole variety of interesting possible answers to this question. Yes, they’re all fake answers – but the fact that the story contains an answer, even if it isn’t true, is what makes it so fascinating.

So, how is any of this useful to us?

Well, one way of making your story or comic more interesting is to include some of these big questions in it and to either offer your own ideas about what the answers are or come up with a really interesting fake answer.

If you can tap into your audience’s curiosity about these unanswerable questions (even in a very subtle way), then this is going to be something that will not only give your story more of an emotional impact, but it will also make your readers more interested in your story too.

Sorry that this article was so short, but I hope that this was useful 🙂

Sorry that today’s painting ended up being slightly unimaginative (I don’t know, I wasn’t really feeling that inspired), but the background of it ended up being a lot more detailed than I’d originally planned 🙂

PekoeBlaze – the official blog
Create a free website or blog at WordPress.com.