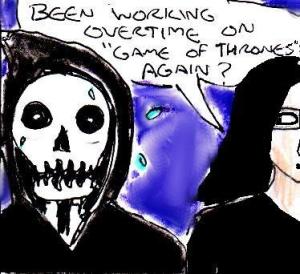 [Note: Before I begin, I should probably point out that this article will include MAJOR SPOILERS for “Serenity” and season one of “Game Of Thrones”.

Also, although the short clips from these two things that I’ve linked to in this article contain little in the way of blood or gruesome imagery, viewer discretion is advised. That said, let’s begin…]

If you’re telling a dramatic story (whether in a novel, a comic, a movie etc…) then there’s a good chance that at least some of the main characters won’t survive to the end of your story.

Of course, main character deaths aren’t mandatory for every type of story and they tend to be at their most dramatic when they appear in genres which feature a large number of violent events that the main characters usually tend to survive (eg: thriller stories, war stories, sci-fi stories, horror stories etc..).

When it’s done well, the death of one of your main characters can add poignancy and emotional resonance to your story. But, when it’s done badly, it can just seem like a way to annoy your fans and to squeeze some cheap drama out of an otherwise mediocre story.

There are a lot of different approaches to handling main character deaths – they can be infrequent and shocking, (like in “Serenity” or the various versions of “Star Trek”) or they can happen ridiculously often (like in “Game Of Thrones”).

Both approaches have their merits and their drawbacks and they’re better suited to different types of stories.

But, whichever one you use, there is one thing you should always remember when you decide to kill off one of your main characters for dramatic effect.

Make it sudden and make it unexpected.

If your audience know that a character will die long before they actually do, then the death scene will lose a lot of it’s shock value. But, if it comes out of nowhere and happens before your audience quite knows how to react, then it’s the kind of thing that they’re likely to remember and talk about for a long time.

A good example of this can be seen in a sci-fi movie called “Serenity”. At the end of a dramatic space battle- the crew of the Serenity are forced to crash land on a planet. At first, it seems like everyone is alright… and then this happens.

Another good example can be seen in “Game Of Thrones” where, near the end of the first season, it seems likely that Ned Stark will be spared execution by the villainous King Joffrey after he confesses his “crimes”….. and then this happens.

So, in short, a dramatic main character death scene should be like a plot twist, but without the foreshadowing.

Sorry for another short article, but I hope that it was useful 🙂