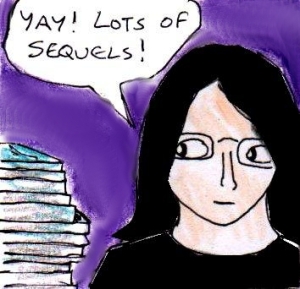 Whether you’re writing a novel, a short story collection and/or a comic series, it can always be a good idea to leave room for additional stuff. Whilst some stories are totally self-contained and would be ruined by a sequel or spin-off of any kind, many stories aren’t.

Still, if you want to write sequels or spin-offs to something you’ve made, it can often be a good idea to plan for this in advance when you’re writing your original story.

Not only does a sequel allow you to revisit your favourite characters and/or settings, but it also provides something extra for fans of your original story too. Plus, of course, writing a spin-off allows you to do all sorts of interesting new stuff with the “world” of your story too.

In fact, technically speaking, some writers produce literally nothing but sequels (eg: Lee Child) – but, of course, once you’ve produced more than about one or two sequels you can call your work a “fiction series” and avoid any negative connotations that come with the word “sequel”.

So, how do you leave your work open to sequels and spin-offs? Here are a few tips:

Why? Because, if you do this, then you will have a ready-made main character for any spin-offs you plan to write.

Not only that, if you just decide to write an “ordinary” sequel rather than a spin-off, then promising your readers another glimpse of this brilliant secondary character (and following up on that promise) can be a good way to keep your fans loyal.

2) An “open” premise for your story: Whilst your original story should be self-contained and have a recognisable beginning, middle and ending – this doesn’t mean that making sequels is a difficult thing to do. All you have to do is to make sure that there’s something in the premise of your story that leaves it open to sequels.

For example, if you are writing a story about a detective who solves a particularly tricky murder case, then the fact that your main character is a detective automatically leaves your story open to sequels. Why? Because he or she will almost certainly have other cases to solve in the future….

Likewise, if you’re writing a sci-fi story about a group of characters who crash-land on another planet and have to find a way off of the planet, then maybe make a few references to the fact that they’re scientists and/or explorers rather than just “ordinary” space travellers.

Why? Because scientists and/or explorers travel around the galaxy in a group on a regular basis, but a group of “ordinary” space travellers probably won’t get on the same spaceship together again.

3) An interesting setting: Even if all of your main characters die at the end of your original story, then you can still write a good sequel if your story is set in an interesting enough location. Yes, this only really works for sci-fi, fantasy and/or horror stories – but a suitably original, detailed and interesting setting can almost be a character in and of it’s own right.

So, even if your sequel has a totally different group of main characters then it will still be recognisable as a sequel if it is set in the same “world” as your original story was.

Yes, it might be a good idea to make a couple of brief references to the events of your original story, but if your setting is distinctive, recognisable and interesting enough- then you don’t even have to do this.

A good example of this can be seen in two excellent novels called “Lost Souls” and “Drawing Blood” by Poppy Z. Brite (the pen name for an artist called Billy Martin, before he retired from writing) .

Although these two novels both have scenes that take place in a fictional American town called “Missing Mile”, there is little to no crossover between the two books. Yes, the same bartender appears in both novels but that’s the only character they have in common. Even so, they still kind of feel like sequels to each other because of “Missing Mile”.