The Transgender Day Of Remembrance is a day that is held around the 20th November every year in order to remember transgender people who have died due to hate crimes.

Depressingly, there is a new list of names every year. A new list of people who were killed for nothing more than just being themselves. In 2014, no less.

Transgender people have existed for as long as any other type of people- although how and/or whether we can express who we are has varied greatly throughout different cultures throughout history. You would think that it would be a total non-issue these days.

I’m not that good at expressing my gender in real life (for all sorts of reasons ) and, at most, I tend to look slightly androgynous and use androgynous initals rather than my birth name whenever I can. But many other transgender people across the world do express themseleves fully and they should be able to do so without fear (like anyone else). 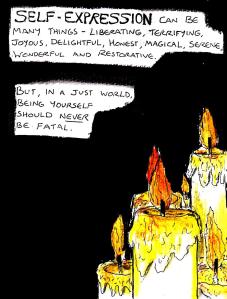