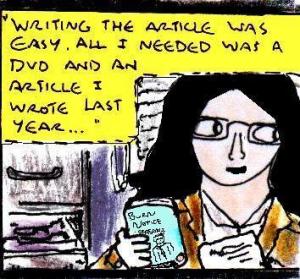 …and a few household stationery supplies.

Even though this is an article about writing thriller fiction, I’m going to start by talking about TV shows for a while. Trust me, there’s a reason for this.

Anyway, I was watching a TV series called “Burn Notice” on DVD recently and it made me realise something interesting about storytelling, particularly in thriller stories.

Although some of the stuff I’m going to talk about here is similar to an article about sci-fi/fantasy fiction I wrote last May, I’ll be looking at more “realistic” types of fiction in this article.

Anyway, “Burn Notice” is a show about an ex-spy who is trying to track down whoever mysteriously fired him from his job – he also solves crimes, helps people and/or outwits criminals in every episode too. It’s a really cool show, but this isn’t a review of it.

But, one of the interesting things about the show which could be useful to thriller writers is the fact that whenever the main character does something sneaky – he’ll usually explain what he’s doing in a voiceover. In other words, we get the illusion that we’re learning super cool secret spy tricks and this vicariously makes us feel like super-cool secret agents.

Sprinkling your story with cool-sounding “information” is a perfect way to keep your readers fascinated. But, since you’re probably not a spy or a detective, then how do you do do this?

For starters, you don’t actually need to talk to any real spies, detectives etc… about how they do their jobs and what tricks they use. Although if you somehow can do this, then this is probably a bonus.

Likewise, you should NOT look up information on the internet about exactly how people carry out activities that would be dangerous and/or illegal. Even though it might seem like an obvious way to do background research for your story, it is a really stupid idea! And, in some cases, it may even land you in legal trouble. So, don’t do this!

In other words, you don’t really have to know anything – since not knowing anything doesn’t mean that you can’t write about it in your story. The trick is to trick your readers into thinking that you know what you’re talking about. Still with me?

The best way to trick your readers into thinking that you know as much as a trained spy, detective etc… does is to start small. In other words, show your main character using a couple of small (non-illegal and non-dangerous) tricks that actually work in real life.

These can be spy/detective-related things (eg: like the main character finding a good place to hide a piece of paper). But they can also be totally random unrelated things that most people don’t know about (like how to extend the life of a marker pen).

As long as it isn’t illegal, violent or dangerous and it sounds like something that most people don’t know and would probably like to learn, then do your research and add it to your story.

A good place to start for researching cool obscure things is a site like Wikihow or, for more directly spy/detective-related things, then check out online articles about things like computer security, home security etc..

Showing you main character protecting himself or herself against the bad guys by using a realistic non-violent security technique that anyone can use is a great way to impress your readers.

For a good literary example, check out the first chapter of Lee Child’s “Gone Tomorrow” (an excerpt can be found here). In this chapter, the main character (an ex-military policeman) is able to spot a suicide bomber because he’s memorised a list of warning signs that tell him what to look out for.

Now, once your readers see these small realistic things, then they’ll probably assume that you know what you’re talking about. So, when it comes to the really dramatic stuff – you can just make it up or, even more sneakily, leave a few details tantalisingly vague. As long as it doesn’t sound blatantly unrealistic, most of your readers will probably believe you.

But what if they don’t? Well, this isn’t as much of an issue as you might think.

Chances are, any actual detectives, spies etc.. that read your story will probably be glad that you aren’t actually teaching the general public anything dangerous or secret.

Not only that, most people are smart enough not to imitate things that they read in thriller novels – so they’ll probably never check. At worst, if your story becomes extremely popular, then any films based on it might eventually appear in a segment of “Mythbusters” or something like that (and, let’s face it, having something based on your work appearing on a major TV show is hardly a bad thing).

So, remember, if you make sure that the small stuff is realistic, then you can just make the big stuff up and most of your readers will probably believe you.

4 comments on “How To Add Some Trickery To Your Thriller, Detective and/or Spy Story”