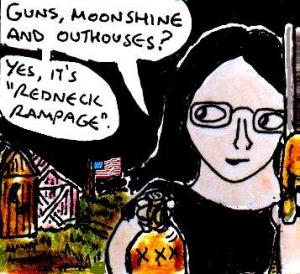 A few weeks ago, I was clearing some space on my hard drive when, to my surprise, I noticed that I still had a copy of “Redneck Rampage” installed on there.

I remembered playing this game round a friend’s house back in the 90s when I was a kid and, in either 2008 or 2009, I found a cheap second-hand copy of my own in a charity shop. However, if I remember rightly, I couldn’t get it to work on my 2000s-era computer.

But, being slightly older and wiser than I was back then, I decided to look around online for a source port – and, lo and behold, I found one! So, I’m finally able to review “Redneck Rampage”.

I should also point out that, at the time of writing this review, I’ve only had the chance to play it for a couple of hours – so this review will mostly be based on this (and on my memories of the game from the 90s too). 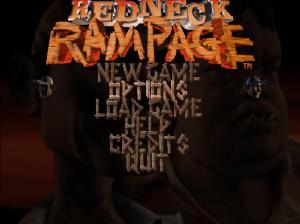 “Redneck Rampage” is an first-person shooter game from the mid-late 1990s, which uses the “Build Engine” (of “Duke Nukem 3D” fame).

You play as a good ol’ boy called Leonard whose small town has been invaded by aliens and deranged hillbillies who have *gasp* stolen one of your pigs. In addition to this, your brother Bubba is nowhere to be seen…

No, wait… THERE he is!
(Sorry, I couldn’t resist making an animation – the framerate isn’t as jerky in the actual game)

The gameplay in “Redneck Rampage” is pretty much what you would expect from a 1990s Build Engine game. In other words, this game comes from an era when people actually expected their FPS games to be challenging and to have interesting level design. So, if you expect this game to be easy, then you’re in for a big shock.

Expect to die very often and to get completely stuck every now and then searching for keys and switches. I absolutely love this about old FPS games, but you might not. 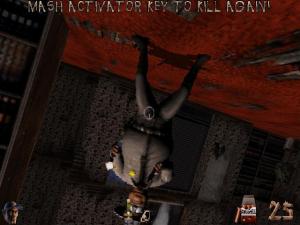 I fought the law, and the law won. Again.

Whilst “Redneck Rampage” features a good old-fashioned health system (with none of that modern “regenerating health” nonsense), I should probably mention something about the health power-ups that you’ll find in this game.

Whilst the food-based health items function like “ordinary” health-powerups, you can also find a bottle of “cheap-ass whiskey”. This functions like the portable medkit in “Duke Nukem 3D”, however it can only be used in increments of ten health points.

Not only that, if you use it too often, then you will actually get drunk – and the controls will be scrambled for a couple of minutes. Whilst this is kind of funny, it get annoying after a while – especially given how difficult the game already is. 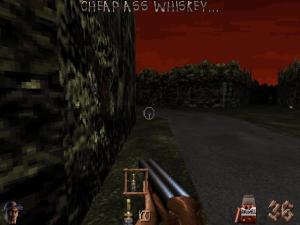 It’s somehow both the most useful… and useless.. power-up in the game.

Although the level design in “Redneck Rampage” is fairly complex and non-linear – the game is only about fourteen levels long.

However, given the high difficultly level, each level will take you between thirty minutes and an hour to complete, so you’ll still get a lot of fun out of this game- even though it’s a very short game by 90s standards.

Whilst most of the weapons in “Redneck Rampage” work relatively well on a technical level – there are a couple of glaring design errors that can occasionally get in the way of the gameplay: 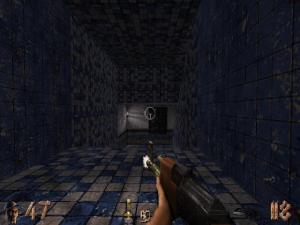 The barrel is pointing to the left, but the crosshair is in the middle of the screen. Welcome to uncanny valley. 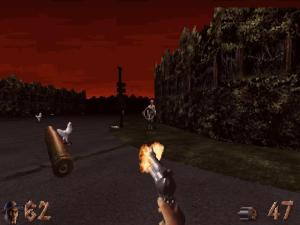 Did that revolver just EJECT a bullet casing?

But, for all of my criticisms, one of the great things about “Redneck Rampage” is that it doesn’t just contain the same boring old assortment of guns that appears in almost every FPS game.

But, saying that, there are some hilariously inventive weapons here – such as a crossbow that fires dynamite arrows, a gun that fires circular saw blades and – if I remember rightly – a bra-mounted machine gun. Yes, this is the only FPS game I’ve ever played where you can wield deadly lingerie.

The enemy designs in this game are kind of strange too. The enemy sprites have been created using still images of (rather basic) 3D models. Whilst this gives the game the illusion of being more “realistic”, I vastly prefer the more “cartoonish” style of sprite design that is a regular feature of most other mid-90s FPS games. 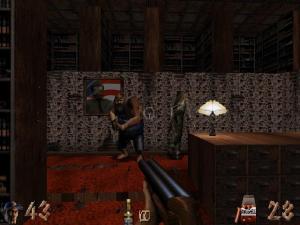 Cartoonish sprite graphics are AWESOME. So, WHY try to make them look 3D?

Likewise, the enemy animations are reasonably ok – but nothing spectacular. They aren’t really animated that smoothly (although much more smoothly than the jerky animation earlier in this review though), but the animation still works well enough not to ruin the game.

Still, saying this, the “Sheriff” character is notable because he will actually occasionally pause to re-load his guns. Seriously, this is something that you hardly ever see with enemies in old FPS games.

Like pretty much every game that was made using the “Build” engine, “Redneck Rampage” doesn’t exactly take itself entirely seriously… 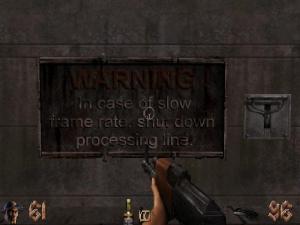 Whew! Thank heavens for THAT! The 486 processor in my computer was starting to overheat… 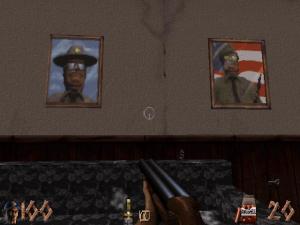 However, I should probably caution you that this is not a game for the easily-offended and pretty much everything in this game is… well… politically incorrect to say the least.

Amusingly though, the dialogue in the game was quite heavily toned down in the original release. Yes, I know that game censorship was stricter in the 90s – but I find it hilarious that the game developers could get away with including semi-nude women and lots of blood and guts, but they couldn’t allow the main character to use some of the best four-letter words in the English language. However, Xatrix Entertainment later released a patch online called the “cuss pack” to correct this bizarre censorship.

And, although this patch is included with the “erampage” source port, I couldn’t get it to work properly – so I was stuck with nothing but PG-rated profanity, rather than the much more realistic dialogue that the developers originally intended [Warning: contains crude language. Obviously.]

All in all, “Redneck Rampage” certainly isn’t the best or most well-designed FPS game to come out of the 1990s. But, saying that, the gameplay is still reasonably fun and – given how simplistic many modern FPS games apparently are- it’s refreshing to play a game from the decade when the FPS genre still revolved around challenging gameplay and good level design.

If I had to give it a rating out of five, “Redneck Rampage” would probably get three and a half.