Well, today’s painting is another landscape based on some photos that my parents took of Dorset for me when they visited there a couple of months ago.

I’m not quite sure how long this short painting series will be (for starters, it’s still kind of strange to paint scenes set during the day), but it’ll probably go on for at least another day or two.

As with the previous two paintings in this series, I’ll also provide the original lineart for this painting as a blog exclusive too.

As usual, the two images in this blog post are released under a Creative Commons BY-NC-ND licence. 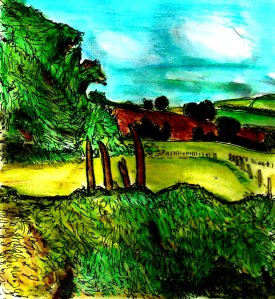 And here’s the lineart: