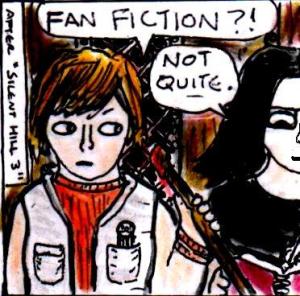 Well, yet again, I’m going to have to start an article about writing fiction and/or comics by rambling about videogames for five or six paragraphs. And, like with yesterday’s article, there’s a very good reason for this. Plus, in case it gets boring, I’ll also include an exclusive drawing too.

Anyway, a few weeks ago, I saw some gameplay footage of the demo of the latest “Silent Hill” game and I was seriously impressed by it. It was dark, it was atmospheric, it was surreal and it was genuinely creepy.

For a short while at least, it actually made me feel kind of bad about being a retro gamer – since this was actually a good modern game and I didn’t have anything current enough to play it on.

My amazement at this upcoming game was compounded when I found some wonderfully unsettling, disturbing and nightmarish concept footage for the game on Youtube. And, then I vaguely started to feel in the mood for writing some horror fiction – but I couldn’t come up with any good story ideas, so I just made this creepy drawing instead: 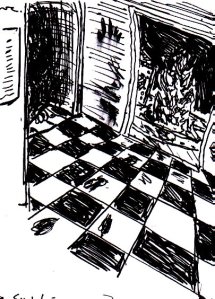 “Horror Doodle” By C. A. Brown

Just as I was finishing this drawing, I suddenly realised something interesting – I didn’t want to write a horror story, I wanted to make the next “Silent Hill” game. So, I asked myself “If I was making a Silent Hill game, what would the story for it look like?”

Within less than a minute, I’d already scribbled a short plot summary in my sketchbook. Although it involved the haunted town of Silent Hill, the central themes in it were very different from the themes that usually appear in a “Silent Hill” game.

In fact, I realised that – with a few alterations – my idea for a “Silent Hill” game might actually make a very interesting stand-alone horror story, with no connection whatsoever to “Silent Hill”. That is, of course, if I ever get back into actually writing fiction again….

So, why is any of this relevant to you?

Well, if you’ve got writer’s block, then it can be a good idea to take a look at your favourite film, game, TV and/or movie franchise and ask yourself this simple question: “If I could make a new addition to this series, what would it look like?”

Just think about it for a second – if it’s something that you really love, then there’s a good chance that it won’t take you too long to come up with a few ideas of your own. After all, you’re thinking about something that has fired your imagination and fuelled your daydreams for years.

Not only that, there’s a good chance that whatever story idea you come up with will contain a lot more of your own imagination than you expect. After all, you are a different person to the people who created your favourite things and your imagination is fairly different from theirs.

Now, of course, you could just take the easy route and just start writing fan fiction. But, let’s face it, you won’t be able to publish this properly and it’ll be seen by many readers as a “second-rate” type of fiction. So, what can you do to make sure that your great new idea isn’t wasted on a fan fiction site?

It’s simple, see what you can change about it in order to turn it into something totally new and original. And, yes, you will probably have to change a lot – literally all of the settings, characters, backstories etc… will have to be changed for starters. Not only that, it’s generally a good idea to make more changes than this just to be on the safe side.

Ideally, the only thing that you should keep is the basic skeleton of a story idea (eg: “this happens to the main character, which means that…”) that you came up with when you started this exercise. Everything else should be new and original.

And, in case that you’re worried that this is “cheating” – it’s been done before by famous writers and in famous movies. I mean, the excellently creepy “Final Destination” horror movie series emerged from what was originally going to be a script for an episode of “The X-Files” and, of course, E. L. James’ badly-written “Fifty Shades Of Grey” novel started out as a piece of *ugh* “Twilight” fan fiction.

So, whilst this technique may or may not lead to you writing good fiction – it will at least give you a story idea or two. Plus, it will save you from having to resort to writing fan fiction too.