Well, I was kind of in the mood for making another B&W retro sci-fi drawing today and I’m really proud of how it turned out 🙂

As usual, this drawing is released under a Creative Commons BY-NC-ND licence.

“Starport Seven” By C. A. Brown

Well, it’s the end of the month and this means that it’s time for me to compile a list of links to my ten favourite article about writing and/or art that have been posted on here over the last month. As usual, I’ll include a few honourable mentions too.

In general, this has been a fairly good month for this blog – although I felt uninspired more often that I had hoped, this month’s article were thankfully better than the last time that this happened (eg: in February).

– “Five Things I’ve Learnt From Running A Blog For Two Years”
– “Are Step-By-Step Drawing Guides Really The Best Way To Learn?”
– “Creating Running Jokes For Your Story Or Comic”
– “Three Ways To Get Better At Drawing In Black And White (With Art Preview)”
– “Improving A Black And White Drawing (Plus Exclusive Art!)”
– “Telling Horror Stories Set During The Day”
– “Imagination In Translation – A Ramble”
– “What Does ‘Good Artists Borrow, Great Artists Steal’ Actually Mean?”
– “Some Sneaky Tricks For Speeding Up Your Comic – A Comic Page Dissection”
– “Computer Games And Creative Inspiration”

Well, it’s been a while since I made some gothic art – so I made this painting. And, despite the fact that it ended up requiring more digital editing than usual after I scanned it, I’m really proud of how it turned out 🙂

The English language is a constantly evolving thing. Since we thankfully don’t have an equivalent to the Académie française that declares what is and isn’t “officially” part of the English language, our language can grow, adapt, expand and borrow things from other languages freely. This is a great thing and it is also one of the many reasons why English is one of the more widely-spoken languages across the world.

But, if you’re writing science fiction, then this can pose something of a problem. After all, if the English language is constantly evolving, then it’s probably going to look at least slightly different in the future than it does now. Afrter all, the English that people spoke a thousand years ago is very different to the English that I’m using to write this article.

Many writers have attempted to guess what the future of the English language will look like in sci-fi stories, with varying degrees of success. The two most notable attempts I’ve seen at creating a “futuristic” version of English in science fiction can be found in Anthony Burgess’s “A Clockwork Orange” and Russell Hoban’s “Riddley Walker”.

Unlike in the Stanely Kubrick film adaptation of “A Clockwork Orange”, where the characters only use the occasional word of futuristic slang, Anthony Burgess’s novel is narrated entirely in this “futuristic” version of English. And, yes, in the UK edition of the book at least, there is no glossary whatsoever.

What this means is that although the book in incredibly short, it will take you about three times longer to read than you might expect because you will have to spend ages working out what each word means.

Russell Hoban’s “Riddely Walker” is set in a post-apocalyptic future and this is reflected by the fact that language has become slightly more primitive in some ways. The whole novel is, of course, narrated in this “post-apocalpytic” version of English.

I tried to read this book in 2010 and unfortunately, the narrative style just ended up being too confusing and obtuse, and I ended up abandoning it after a few pages.

And, this, I think is one of the major problems with trying to create a “realistic” version of what the English language might sound like in the future. It may be a clever linguistic experiment or a fun gimmick, but – more often than not – it gets in the way of the story itself.

If your audience has to spend two minutes figuring out what a single sentence means, then they’re probably either going to stop reading out of sheer frustration or they’re going to lose track of the story that you’re trying to tell.

However, most sci-fi writers realise that practicality is the most important thing in a story and either just use modern English or they add a few new words – whilst making sure that the audience can understand what these words mean from either the context in which they are used or from just looking at the word itself. This approach obviously works best in stories that are set in the near future, where the English language won’t have had time to change too much.

The most notable examples of this far more sensible approach to writing futuristic speech can be seen in many classic cyberpunk novels form the 1980s. Although most of the narration uses “ordinary” English that the audience can understand, the writers aren’t afraid to drop in the occasional futuristic word or expression, to reinforce the fact that the story is set in the future.

So, I guess that what I’m trying to say here is that it’s ok to invent new words and/or expressions to show that your sci-fi story takes place in a more realistic version of the future but remember to do it in a more subtle way. With futuristic language, less is often more.

Although today’s painting started out really well, I couldn’t really think of a good idea for a background – hence the weird green thing in the background.

Computer and video games often get a bad press when it comes to creative work (and work in general). After all, they’re often seen as a tool of procrastination and distraction, rather than something that can help us to be more productive.

But, I’d argue that they can be one of the most overlooked sources of creative inspiration out there for a number of reasons. Here are three of those reasons:

1) Mindful distraction: Let’s face it, uninspiration can be one of the most frustrating things in the world. Whether it’s writer’s block or artist’s block, there is nothing more annoying than wanting to write something or draw something, only to find that you have no ideas whatsoever.

Of course, the more you sit there and try to think of a creative idea, the further out of reach any good ideas tend to become. Feeling frustrated about your creative work is one of the quickest ways to shut off the possibility of feeling inspired.

So, you need to distract yourself from your feelings of frustration about your writing or art for a while. But, if you’ve ever felt frustrated, then you’ll know that it isn’t something that you can just not think about. No, getting rid of creative frustration usually requires getting frustrated about something else – and this is where computer games come in.

Playing a fiendishly difficult, but fair, computer game can be a great way to redirect your feelings of frustration away from your creative work and turn them into something far more enjoyable.

Choose a game in a genre that you enjoy and crank the difficultly settings up as high as they will go (for me, this might include be playing “Left4Dead 2” on ‘expert’ difficulty, or playing “Doom” on ‘nightmare’ difficulty whilst using only the traditional keyboard-only controls), then see how far you can get. You will fail repeatedly, but you will also know that you can succeed if you use the right techniques and tactics – after all, no-one intentionally makes unwinnable games.

At the very least, this will make you frustrated about the game that you’re playing, rather than about your creative work (putting you in a slightly better frame of mind to feel inspired). But, more likely, it will either be a slightly meditative experience that will allow you to think about your creative work in a slightly more calm way or it will put you into more of a “puzzle-solving” state of mind, which can be useful for solving any creative “puzzles” that you might also be dealing with.

2) You’ll want to make one: If you play enough computer and video games, then you will eventually want to make one of your own. But if, like me, you’re almost allergic to programming and if the idea of spending months or even years on a single creative project sends shivers down your spine, then it’s likely that your ideas for computer and video games will be nothing more than idle daydreams.

However, as you’ve probably already guessed, idle daydreams can be a great source of creative inspiration. Yes, you might not be able to make a computer game – but you can take the basic idea (eg: the story, settings, characters etc…) you had for that computer game and turn it into something else, such as a short story, a comic or a piece of art. Although this isn’t always the most reliable source of inspiration, it can be a surprisingly powerful one.

For example, both the zombie-based horror comic that I posted on here late last month/early this month and the zombie-based art series I posted here a couple of weeks before that were heavily inspired by an idea for a computer game that I’d had a couple of weeks earlier. I’d been daydreaming about this game repeatedly for weeks until eventually, I thought “I’m never going to be able to make this game, so I might as well cut my losses and turn it into a few pieces of art and a comic.”

Because I’d also been daydreaming about this idea for such a long time, it was really easy to turn it into other things. But, of course, you’re not going to be able to think of interesting ideas for computer games unless you’ve already played quite a few of them….

3) Modding: One of the great things about computer games is that, if a game has been around for long enough, then some of it’s players will have probably made their own modifications (or “mods”) to the game.

Most of the time, these modifications are released online, so that other players can enjoy them too. And, yes, you’d be surprised at how changing something relatively small about a game can have such an effect on the experience of playing the game as a whole.

Unfortunately, this idea of “modding” doesn’t really exist to anywhere near the same extent in other creative mediums. There are a whole host of reasons for this but, don’t worry, you can still do something similar in order to get into a more inspired frame of mind. You can write fan fiction, you can make fan art, you can make a parody of something – or, if you want to be more professional and imaginative, you can create something totally new that is inspired by the things that you love.

Well, I thought that I’d try to make a vintage-style painting for today, although despite a fair amount of digital editing, it didn’t really turn out as well as I had hoped. 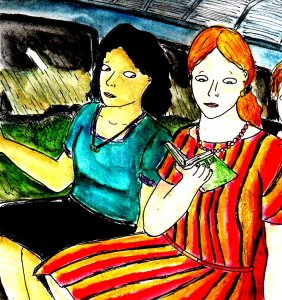 PekoeBlaze – the official blog
Create a free website or blog at WordPress.com.