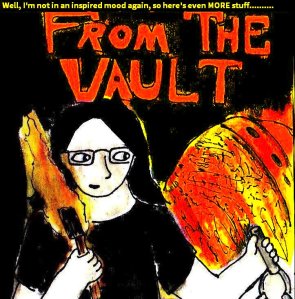 So, instead, here are a couple of “never seen before” watercolour paintings that I thought weren’t quite good enough to post here in one of my daily art posts. Plus, there’s a random badly-drawn fan art drawing of one of the cultists from an old computer game called “Blood” and an attempt at graphite painting too.

Sorry about this and hopefully I’ll write a proper article and/or review for tomorrow. 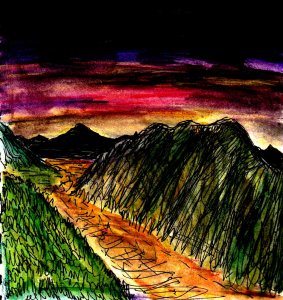 This was a fairly crappy landscape painting I made when I felt extremely uninspired. It was originally going to be posted in one of my daily art posts, but thankfully I made a better painting instead.

This was a still life painting of some of the random old stuff on one of my desk shelves. It was originally going to be featured in one of my daily art posts, but I wasn’t really satisfied with it and ended up making another painting instead.

This was some badly-drawn fan art of one of the cultists from an old computer game called “Blood” that I drew when I was feeling bored one day.

This was a random experiment to see if I could use 6B pencils in a similar way to the way I use watercolour pencils.

Hopefully, I’ll write a proper article (or even a review) for tomorrow. But, I hope that this was interesting 🙂