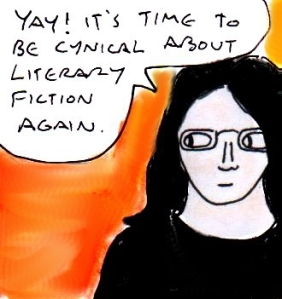 Well, once again, I was looking at random stuff on the internet when I happened to stumble across this old news article from 2011 about a group of authors criticising a BBC program at the time for only really focusing on “literary” fiction, at the expense of genre fiction.

If you’ve never heard of literary fiction before and don’t know what it is, then consider yourself lucky. It’s a genre of fiction that often focuses mostly on “ordinary” everyday life, it’s often over-written and it often tends to get a lot of prestige and awards. Some older novels that originally weren’t intended to be “literary” fiction can also find themselves cruelly stuffed into this stultifying category by critics, through no fault of their own.

So, for today, I thought that I’d list a few of the many reasons why genre fiction is better than literary fiction. I’m not sure if I’ve said all of this stuff before, but it certainly bears repeating.

1) Imagination: This is the most obvious reason, but it bears mentioning. Genre fiction is imaginative. Yes, genre stories might have their fair share of clichés and tropes, but they are often stories about imaginative things.

In other words, they’re “unrealistic” and they’re so much better for it! After all, we all experience boring, ordinary real life on a regular basis – so, why would we want to read about someone else’s boring ordinary life for enjoyment?

Whereas, someone writing genre fiction can sound a lot younger or older than they actually are.

There’s often no way of telling an author’s age just from what they’ve written (thus putting both younger and older genre writers on a level playing field). Literary fiction, on the other hand, does very little to disguise the age of the writer (mainly due to it’s focus on realism).

What this basically means is that literary novels will often use the most elaborate prose to describe the most mundane things, just to show off their writing skills. Whereas, genre fiction writers usually only use elaborate prose when it serves to make the story more interesting.

For example, a horror writer might describe a disembowelled corpse in an almost poetic level of detail, but he or she only does this in order to make the reader more grossed out by it.

Likewise, a fantasy writer might describe a dwarven castle or an elvish village in a ludicrous amount of detail, but that’s because he or she is trying to create a vivid image of somewhere that the reader has never seen before. Describing an “ordinary” suburban house in this level of detail is totally unnecessary, because most of us already know very well what one of these looks like.

But, most of the time, genre fiction is written in a way where the words don’t get in the way of the story. Genre stories often use slightly simpler (but not stupid) narration because they know that the reader is reading for the story and not because they want to see if the author has memorised a thesaurus.

4) Fun: This goes without saying, but reading should be fun. People care more about stories when they enjoy them.

There’s a reason why some “literary” novels are only really read in schools, colleges and universities – where people literally have to be compelled to read them.

There’s a reason why, if people have only read these books (often against their will), they can easily conclude that reading (as a whole) is “boring”.

These are only a few reasons out of many, but I hope they were interesting 🙂