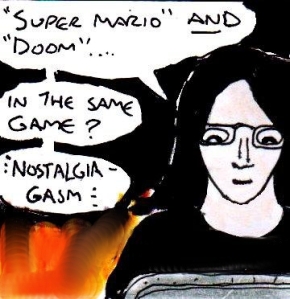 Well, since I’ve been playing a lot of “Tyrian 2000” and “Rise Of The Triad: Dark War” recently, I seem to have neglected “Doom II” somewhat 😦

So, I thought that I’d rectify this sad situation by taking a quick look at a WAD for “Doom II” called “Doom: The Golden Souls“.

Before I go any further, I should probably point out that I played the “Definitive edition 1.2” of this WAD using the “GZDoom” source port . Plus, at the time of writing this review, I’ve only had time to play about ten levels of this WAD – so, this will be more of a “first impressions” article than a full review.

Anyway, let’s take a look at “Doom: The Golden Souls”: 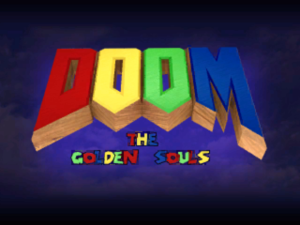 “Doom: The Golden Souls” is a multi-level WAD that seems to be based on “Super Mario 64“.

Although I played “Super Mario 64” a couple of times when I was a kid, I didn’t actually own a copy of it. So, instead, I have many fond memories of playing “Super Mario World” on the SNES. Even so, I was a little bit curious about the idea of a Mario-themed “Doom” WAD.

One cool thing about “Doom: The Golden Souls” is that it has a short optional “Mario Paint”-style animated intro movie that you can watch, which explains the game’s backstory.

In short, UAC have been working on a project to make paintings come to life – however, as you may have guessed, they end up accidentally opening a portal to hell instead. The monsters that emerge from the paintings also steal several valuable “golden souls” and it is up to the Doomguy to retrieve them.

Like in what I remember of “Super Mario 64”, this WAD begins in a large mansion-like hub level and you can choose which level you want to play by walking up to a painting and pressing “action”.

However, many parts of the mansion don’t become available until you have collected a certain number of “golden souls” – so, this game isn’t quite as non-linear as it might appear at first. 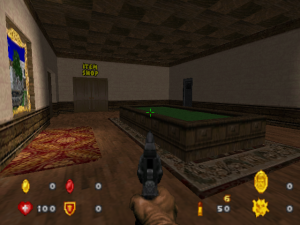 Each of the paintings you’ll find in the mansion lead to a new level of the game.

As for the levels themselves, they are – quite simply – amazing. Each level has a very unique and creative look to it and there is also authentic “Super Mario”-style background music too, which is wonderfully nostalgic. 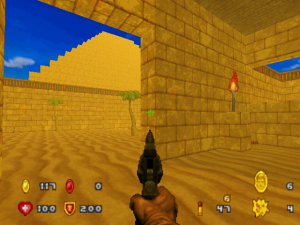 OOooh, I LOVE FPS games that are set in Ancient Egypt! 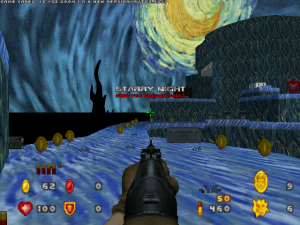 Yes, there’s even a level based on Van Gogh’s “Starry Night”. This WAD is sublime! 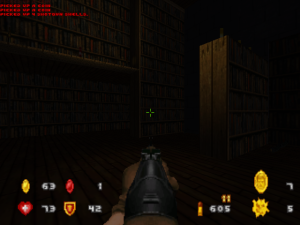 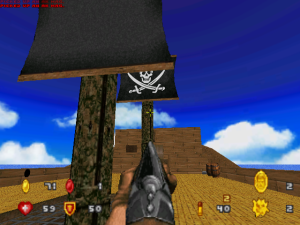 The gameplay in each level falls into one of three types. You either just have to make your way through a level and find a golden soul, you have to fight a level boss or you have to find eight red coins.

The last of these three level types is probably the most frustrating, since some of the red coins tend to be very well-hidden and you’ll spend quite a bit of time wandering around the level in sheer frustration. Still, the inclusion of different level types adds a surprising amount of variety to the gameplay.

However, for the most part, the platforming actually works fairly well in this WAD and there are very few genuinely frustrating platforming sections in “Doom: The Golden Souls”:

Well, except for THIS one!

Talking of coins, this game also includes lots of collectable “Mario”-style coins that you can use to buy items and power-ups between levels.

Since you can return to the hub level at any time (if you can get back to the beginning of the level you’re playing), this also allows you to stock up on health and armour before boss battles.

So, THIS is what retired space marines do for a living…

One cool thing about “Doom: The Golden Souls” is that it contains an entirely new collection of weapons and they work really well. The pistol has been replaced with a revolver (don’t ask me why, but I love it when FPS games include revolvers) and the shotgun has been replaced with a realistic double-barrelled shotgun (eg: you can only fire one shot at a time and the gun’s barrels are on top of each other).

Yes, a rainbow gun. And it is AMAZING!

Unfortunately, like many modern “Doom” WADs, most of the weapons have a ‘realistic’ reloading system – where you will need to reload your guns after a certain number of shots. Although this breaks up the flow of the gameplay slightly, the reloading animations are fairly quick and they don’t get in the way of the gameplay too much. 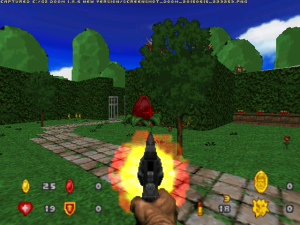 Like these #+&^*%$ plants! They shoot fireballs at you and they will quickly become the bane of your existence!

The game also includes these adorably annoying cactus creatures from the old “Mario” games too.

All in all, “Doom: The Golden Souls” is an incredibly fun and creative WAD that will fill you with childhood nostalgia. It’s challenging, interesting and.. well… just extremely fun. If you’re a fan of “Doom”, the 1990s and/or “Super Mario” then this WAD is certainly worth checking out.

If I had to give it a rating out of five, it would get five.