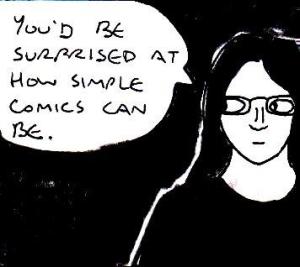 I know that I’ve probably said all of this stuff before, but I thought that I’d talk about minimalist comics today since – at the time of writing – I’m working on a dark comedy comic called “The Horror Of Hardtalon Hall“, which hopefully will have been posted here in late October. Here’s a page from it:

[CLICK FOR LARGER IMAGE]”The Horror Of Hardtalon Hall – Page 1″ By C. A. Brown

Anyway, minimalist comics are comics that are (relatively) quick to make, but which also look interesting enough for people to actually want to read.

I absolutely love making these types of comics because they allow me to be a lot more spontaneous and, because they’re fairly quick to produce, they never really outstay their welcome. But, how do you make them?

1) Black and white artwork: One of the reasons why I’ve made more comics this year than I did last year was because I learnt how to draw in black and white late last year.

Black and white artwork is absolutely perfect for minimalist comics for a whole host of reasons.

First of all, you don’t have to carefully work out a colour scheme for each panel of your comic. As long as most pages of your comic contain a good balance of brighter and darker areas, then it will look fairly good.

Not only that, you don’t have to constantly switch between colours (either on a computer program or with traditional art supplies) when making B&W artwork, which can help to speed up your comic. Likewise, B&W artwork can be digitally edited a lot more quickly and easily than colour artwork can (I mean, you can even use MS Paint to edit B&W artwork quickly).

Finally, even the most mediocre B&W art (like my own) tends to look a lot more professional than mediocre colour artwork does.

2) Misdirection: One of the best ways to disguise the fact that you’re making a minimalist comic is to include one or two more detailed panels every now and then (when it makes sense to do so in the context of your comic – eg: when you’re introducing a new setting) and then to keep the level of detail to an absolute minimum in the other panels.

Here’s an example from one of my other comics called “Dead Sector” – notice how the second panel has far more detailed and realistic artwork than the other panels do:

As long as the difference isn’t too obvious, your audience’s attention will be drawn to the more detailed panels and they’ll be less likely to notice the lack of detail in the other panels.

3) Backgrounds: Backgrounds can be one of the most repetitive, annoying and time-consuming parts of making a comic – so, try to keep your backgrounds as simple as possible. For a good example of this, take a look at another page of “The Horror Of Hardtalon Hall”: 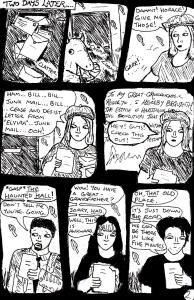 [CLICK FOR LARGER IMAGE] “The Horror Of Hardtalon Hall – Page 2” By C. A. Brown

If you look closely at this page, you’ll probably notice that only half of the panels on this page have detailed backgrounds. The backgrounds for the second, sixth, seventh and eighth panels are just a couple of leaves and a small amount of shading. Likewise, the page I showed you near the beginning of this article just uses a plain black background for each panel.

So, once you’ve used a couple of detailed pictures to establish your setting, try to find a way to make your backgrounds as simple and undetailed as possible.

4) Writing: I know that I’ve probably said this more times than I can remember, but the thing to remember with comics is that the writing matters a lot more than the artwork does. In other words, if you focus on telling a funny/ dramatic/ interesting/ compelling story, then you can get away with using fairly simple artwork.

As long as your artwork clearly shows what is happening, then it can be a lot more simple than you might think. So, use this fact to your advantage when you’re making minimalist comics.

If you want a good “serious” example of how fairly minimalist artwork can be used to tell a compelling story, then check out an excellent autobiographical graphic novel called “Persepolis” by Marjane Satrapi ( or the film adaptation of it ).