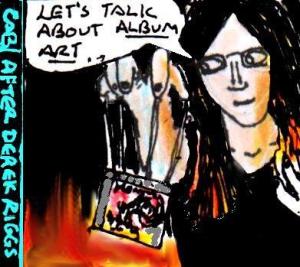 In case anyone is wondering, this little sketch is a homage to Derek Riggs’ excellent cover art for Iron Maiden’s “The Number Of The Beast” album.

Well, for today, I thought that I’d talk about one of the coolest and more under-appreciated types of art out there. I am, of course, talking about the album covers that you’ll find in your CD collection if you’re one of those old-fashioned people, like me, who still has a CD collection.

Although many bands use photos or photo-based images for their album covers these days, proper album art can still often be found on slightly older CDs in the heavy metal genre (and, to a lesser extent, the punk genre).

Even today, heavy metal albums will sometimes feature really epic horror/fantasy- themed paintings as their cover art. I mean, there’s a reason why heavy metal album covers are mentioned in this hilariously memorable line from “Bill And Ted’s Bogus Journey”.

It’s probably no coincidence that my two favourite bands (Iron Maiden and The Offspring) both have a tradition of commissioning really cool cover art for their albums.

Most of Iron Maiden’s classic album covers from the 1980s feature really cool cartoonish horror-themed art (by Derek Riggs), that often uses bold colours and lots of contrast between light and dark areas. This artistic decision really makes their old albums stand out in a way that most other albums just don’t do – seriously, just take a look at the covers of their “Killers” album and their “Number Of The Beast” album.

I mean, I’d be extremely surprised if seeing all of this cool art when I was younger didn’t have at least some influence on how I handle colours in my own art.

Likewise, The Offspring often commission radically different album art for each of their album covers. For example, with their “Ixnay On The Hombre” album cover, they use a really cool orange, black, yellow, white, green and blue colour scheme and some really awesome Mexican calavera art.

But, for me at least, it was Frank Kozik’s brilliantly surreal cartoon artwork on the album and single covers for The Offspring’s “Americana” album (which is the very first Offspring album that I heard anything from when I was a kid in the 90s) that had the most impact on my imagination and my art. In fact, even earlier this year, the art on this album still actually had a surprising influence on my art style.

Although I’ve unfortunately never had the chance to make an album cover for anyone (and, to be honest, I’d probably be kind of nervous if someone asked me to), one exercise that I sometimes do when I want to get inspired is to tell myself to make a painting that could be used as an album cover. Although this tactic doesn’t always work, it can certainly be a good way to make yourself feel more motivated about making art.

Finally, another thing that makes album art such an amazing genre of art is that – if it’s good enough, it becomes inextricably associated with the music on the album. Since the best album art is usually inspired by the artist actually listening to the music and talking to the band, it compliments the music in a surprisingly effective way.

In fact, a good series of album covers can even become part of a band’s identity (like Iron Maiden and all of the art that is associated with them – I mean, their latest music video is actually based on their old album art).

So, yes, album art is one of those genres of art that really doesn’t get as much recognition as it should.

———
Anyway, I hope that this was interesting 🙂

6 comments on “The Joy Of… Album Covers”