Whether you love it, loathe it or think that it’s just ok “Brutal Doom” is probably the most well-known “Doom II” mod of the past decade. In fact, it was the thing that got me back into playing “Doom” regularly again after a few years mostly spent playing other games.

So, I guess it was only a matter of time before modders decided to give other classic 1990s FPS games “brutal” makeovers too.

Anyway, out of morbid curiosity, I decided to check out a “Brutal Doom”-style recreation of “Wolfenstein 3D” called “Brutal Wolfenstein 4.5“.

If you’ve never played “Wolfenstein 3D” before, it’s a WW2-themed game where you play as an American soldier called B.J.Blazkowicz who has been captured by the Nazis and must fight his way out of their fortress (called “Castle Wolfenstein”).

Despite being a Wolfenstein-themed mod, “Brutal Wolfenstein 4.5” uses the “Doom” engine – or, more accurately, the modern source ports of it (I used “ZDoom” whilst playing, but this mod will also run with “GZDoom” too).

So, although you won’t need a copy of “Wolf 3D” to play this game (although if you’re a retro FPS gamer like me, you’ve probably got one anyway) you will need a copy of either “Doom II” or “Final Doom”.

Before I go any further, I should probably mention that this is more of a “first impressions” article than a full review – since I’ve only had the chance to play a few levels of this mod at the time of writing. Hence why I’ve called this article a “mini review”, even though it’s about 1500 words long.

(For the sake of good taste, I’ve also made sure not to include any screenshots that include WW2-related symbols in this review – although, given the context of the game, expect to see a lot of these when playing. Likewise, I eventually decided not to include any screenshots of the more gruesome parts of this mod in this review. However, I’ll be discussing why ultra-gory death animations work reasonably well in the original “Brutal Doom”, but don’t work well in mods based on “Wolf 3D”. Still, despite my criticisms later in the review, I respect the freedom of expression of the people who made this mod and I do not believe it should be censored in any way.)

If you’ve played “Brutal Doom” before, then you’ll sort of know what to expect already.

But, although this mod has a lot in common with “Brutal Doom” (eg: a modern-style reloading and aiming system, different gameplay mechanics, taunts, melee attacks, extra blood etc…), it also has a lot of extra Wolfenstein-specific stuff in it too. Which is both a good and a bad thing.

One of the most notable changes is that parts of the levels I played had been redesigned in order to take advantage of the features offered by the “Doom” engine. The most notable example of this is probably a “Doom”-style lift that I found in one of the early levels.

However, the limitations of the “Doom” engine are also on show here and – like the the secret “Wolfenstein” levels in “Doom II” – all of the doors open vertically, rather than horizontally. But, the changes to the level layouts help to make a familiar game feel new again – which is kind of cool.

Not only that, thanks to the fact that this mod uses modern source ports for “Doom”, the gameplay is fast, frenetic and fluid, which is a refreshing change from the slower and clunkier gameplay in the original version of “Wolfenstein 3D”.

Another change that you will notice fairly quickly is that B.J. Blazkowicz has a lot more weapons available to him than he did in the original game. When playing through the first few levels, I found several different weapons like a bolt-action rifle, a heavy machine gun, a “Rise Of The Triad“-style MP40 and a WW2-era German assault rifle.

It’s kind of weird to see a WW1-style bolt-action rifle in a WW2-themed game though. 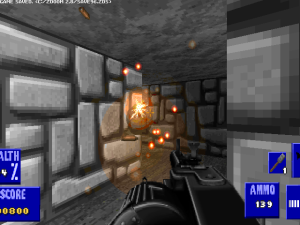 And, yes, this gun sounds as dramatic as it looks.

These weapons each have different characteristics – with the MP40 having abundant ammunition but a lower rate of accuracy, and the assault rifle being more accurate, but at the cost of less available ammunition.

Using the the “give all” cheat, I also took a quick look at the other weapons too and they include a rocket launcher, a flamethrower, a collection of WW2-era American weapons too (eg: a military pistol, a tommygun etc..) and some kind of sci-fi microwave gun.

In addition to this, you can also pick up stick-style grenades which can be thrown using a hotkey (although you’ll have to configure this in the control menu). Although this is a cool feature, there’s a slight delay between pressing the key and actually throwing the grenades – which usually means that you’ll get shot several times before you can throw the grenade. 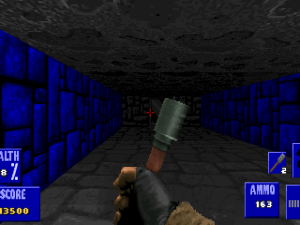 The delay is probably realistic, but it gets in the way of the gameplay slightly.

One slight technical problem I had with this mod is the fact that it seems to be designed to be played in higher resolutions. For speed reasons, I usually play “Doom II” in 640 x 480 but – even after briefly increasing the resolution to 800 x 600 – the heads-up display still couldn’t quite fit onto the screen. Although I kind of got used to this, only being able to see half of the health meter can get slightly annoying.

As you would expect from anything inspired by “Brutal Doom”, this mod is significantly more gruesome than “Wolfenstein 3D” was.

Whilst this obviously includes lots of extra blood spatter, it also includes a few other changes which -whilst they might work in ” Brutal Doom” – don’t really translate well to “Wolf 3D”…

The extra blood isn’t really a major problem – however, this mod also includes some of the more sadistic elements of “Brutal Doom” too. Even though they’ve been toned down slightly, there’s a huge difference between sadism in an obviously unrealistic sci-fi action game like “Doom” and sadism in a game that tells a fictional story set during a real part of history.

Although the enemy soldiers have a couple of different “Brutal Doom”-style drawn-out death animations, these thankfully seem to be fewer in number and slightly less prolonged than the ones in “Brutal Doom”.

Still, given the fact that the game contains human antagonists (even if they are members of one of the most evil organisations in world history), these sadistic animations are significantly more disturbing than the melodramatic sci-fi monster death animations in “Brutal Doom”.

I understand that they’re probably meant to be “realistic” and, in the context of a slower-paced story-driven game, they might be dramatically justified. But, in a fast-paced action game designed purely for entertainment, they seem somewhat out of place.

Another disturbing element in this game is how surrendering is handled.

Like in “Rise Of The Triad”, some of the enemy soldiers will “surrender” after a fight. But, if you wait a few seconds, they’ll just put their hands down, get to their feet, and start fighting you again. As a way of showing how evil the enemies are (and referencing “Rise Of The Triad”), this isn’t particularly disturbing in and of itself, but…..

The disturbing part of this is that, if you accidentally shoot one of these surrendering enemies whilst fighting any nearby enemies then- instead of either punishing you or doing nothing, the game sometimes rewards you for doing this with a health bonus (eg: a “Brutal Bonus” from “Brutal Doom”).

This is extremely creepy – given that the game is set during a historical war (even though the story of the game is fictional), rather than in an unrealistic sci-fi setting. If nothing else, it makes the protagonist look like less of a heroic character.

I’m probably taking this way too seriously, but if the main character is one of the good guys (eg: the Allies) in one of the most clear-cut “good vs. evil” wars in history, then the game shouldn’t reward the player for breaking the rules of war.

As for the enemies, they’ve also received some fairly significant changes too. The most notable change is that they now have new voice acting and this is done fairly well.

In addition to this, there’s a larger variety of enemies to fight against. So far, I’ve noticed that some of the basic “soldier” enemies now carry rifles instead of pistols (and are slightly more powerful as a result) and there’s a new type of “officer” enemy too:

It’s surprisingly difficult to get a screenshot of this guy since, by the time you’ve pressed the “print screen” key, he’s already shot at you several times.

All in all, although this mod is technically impressive and it includes a lot of changes that breathe new life into a very old game, making a “Brutal Doom”-style version of “Wolfenstein 3D” probably isn’t the best idea in the world.

What might be enjoyably melodramatic and cartoonish in an unrealistic sci-fi game tends to come across as more disturbing than anything else when transposed to a real world historical setting.

If I had to give this mod a rating out of five then, on a purely technical level, it would get a four. But, for want of a less-miserable sounding description, on a moral level, it’d probably get a one.