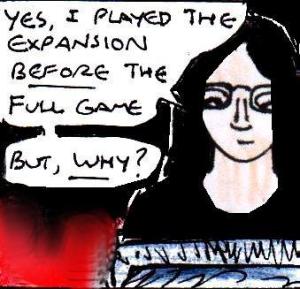 Well, although I’ve only played a few levels of “Blood II: The Chosen” (the sequel to “Blood“) at the time of writing this review, I thought that I’d check out the “Nightmare Levels” expansion pack for this game first. There are several reasons for this that I’ll explain later.

I should probably point out that I bought this expansion pack as part of the “Blood 2: The Blood Group” bundle on GOG (which includes “Blood II” and this expansion) back in November when it was on special offer.

I don’t think you can even buy this expansion separately these days, which is probably a good thing. But, if you do somehow find a separate copy of this expansion then you will need the full version of “Blood II: The Chosen” to play it. 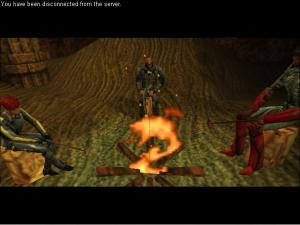 “Blood II: The Nightmare Levels” is a short six-level expansion pack for “Blood II: The Chosen” that also contains new weapons and enemies too.

The story behind the expansion is that, after the events of “Blood II: The Chosen”, the game’s four main characters (Caleb, Ophelia, Ishmael and Gabriella) are walking home through the desert.

One night, when sitting around the campfire, they start telling each other stories about the scariest moments in their lives – only for them to find themselves transported back to these times by a creature called “The Nightmare”.

Via a cool-looking green portal because, well, everything was cooler in the 1990s.

Each one of the first four levels is bookended by these campfire scenes and they are absolutely hilarious. Although some of the voice-acting and dialogue is a little cheesy, it’s still fairly amusing.

However, like all cutscenes in this game, these scenes are unfortunately unskippable, so they can get a little tiring if you have to restart a level.

The main reason why I played this expansion first was because I’d heard that it was a lot more similar to the original “Blood” than “Blood II: The Chosen” is. In terms of classic settings, enemies and references – this expansion certainly doesn’t disappoint in this regard.

There are actual robed cultists who scream gibberish at you (rather than just boring ordinary people and generic sci-fi soldiers), there are hedge mazes, there’s a creepy circus and a spooky old mansion:

Yes! THIS is what “Blood II” SHOULD look like! 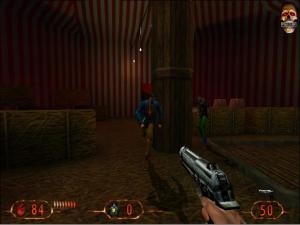 It isn’t a major spoiler, but you actually get to play as JoJo in this level! This level also contains some of the original music from “Blood” too 🙂

And, of course, this expansion also has a brilliantly cynical sense of humour too.

One thing that I love about this expansion is the sheer variety of levels on offer. Yes, there are only six of them, but they each take place in a different and distinctive location – unlike the generic futuristic buildings, cities and train carriages that I’ve seen in what I’ve played of “Blood II: The Chosen”.

In fact, one level even takes place in Ophelia’s old sorority house – which actually looks a bit like something from the original “Blood”:

Yes, this actually looks a bit like something from the first “Blood” game.

There’s also a creepy mansion too. WHY wasn’t this in the early parts of “Blood II: The Chosen”? It’s certainly more interesting than ‘Generic futuristic building #2B’.

However, in terms of gameplay, most of this expansion is ridiculously easy when compared to the original “Blood”. Seriously, I breezed through the whole thing in a just a few hours.

Yes, it’s probably more challenging than many modern FPS games are but it’s still significantly easier than the original “Blood” most of the time. There are a few exceptions to this though, such as the ridiculously (and almost unfairly) difficult final level.

But, when it comes to gameplay, “The Nightmare Levels” suffers from many of the glitches that “Blood II: The Chosen” is notorious for. In addition to this, it also crashes occasionally for no real reason whatsoever.

One glitch I found was that, sometimes, when your character’s health reaches zero – you won’t die. If you start a new level after finishing one on zero health, then none of the enemies will pay any attention to you unless you eother find more health and/or find a life seed (and raise your health to over 100). Although this sounds cool, it quickly makes the game very boring and will mean that you’ll have to restart from a saved game from the previous level if you actually want to have any fun.

On the other hand, some of the glitches can actually come in handy. In fact, the only way that I even stood a fighting chance against the ludicrously powerful final boss was to trap it in various parts of the level and either shoot it from a short distance or, in one case, literally walk inside it (without using any cheats, it just kind of happened) and empty all of my weapons.

As for the new weapons, one of them is a hook that you can throw at enemies. However, this will damage you if you use it at close range and it’s often only really useful for getting more powerful enemies to stand in one place for a few seconds.

The other new weapon is a combat shotgun that can be fired rapidly – although this is a cool gun, it’s surprisingly difficult to find (and you can easily miss it if you aren’t careful), it has a fairly short range and it chews through ammo very quickly.

All in all, this expansion is something of a mixed bag. On the one hand, it contains everything that made 1990s FPS games great – a wide variety of settings, non-linear levels, a creative array of enemies and a lot of humour. It’s also a lot closer in style and tone to the original “Blood” than what I’ve seen of “Blood II: The Chosen” so far.

On the other hand, I can’t ever imagine people actually paying significant amounts of money for such a tiny – and glitchy- expansion pack. It’s a cool additional bonus item when buying “Blood II: The Chosen”, but I wouldn’t advise buying this product on it’s own.

If I had to give it a rating out of five, then it’d maybe get a little over three and a half.