Unless you’re making a webcomic that tells a continuous story, it’s usually a good idea to keep the number of main characters in your webcomic fairly low. Many successful webcomics only really have a fairly small cast of main characters.

If you’re making self-contained comics that are 3-6 panels long, then the ideal number of main characters to include in each individual webcomic update is probably two (with a total main cast of no more than four or five characters) – since this allows you to write interesting dialogue between the two characters in each comic, without worrying about having to introduce too many new characters.

In fact, back in 2011, when I originally started the occasional webcomic series that I was continuing at the time of writing this article – it originally only contained two characters (Roz and Derek).

Of course, over the next year or two, I ended up adding a couple of extra main characters (Harvey and Rox – both of whom appeared in 2012). So, now this comic has four main characters and all four of them have remained a part of the main cast ever since. But, since I only usually have room for two characters in each comic, what do I do?

Most of the time, I have an informal rule where, for each set of two comics – if I don’t include a character in one comic, then they’ll appear in the next one.

Since my comics contain an even number of characters, this usually means that each character gets a fairly similar amount of “airtime” – meaning that new readers won’t be too confused about who is who after reading a couple of comics.

Not only that, since I only apply this rule to sets of two comics at a time, it also means that the same combinations of two characters doesn’t appear in half of all of the comics and vice versa.

For example, here is a comic that includes my original two characters, Roz and Derek: 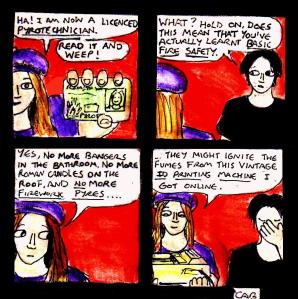 Since Harvey and Rox didn’t appear in this comic, I made a mental note to include them in the next comic. Of course, Roz also ended up appearing in that comic too but, as you can see- the comic is mostly a Harvey & Rox -based comic:

Sorry for yet another short article, but I hope that it was useful 🙂