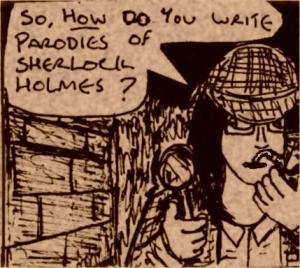 Although I regret to say that, at the time of writing, I have not written a “serious” story that features the great detective, I’ve done the next best thing. I’ve written parody stories inspired by Sherlock Holmes. If you’re not interested in reading my nostalgic ramblings about them, then feel free to skip the next three or four paragraphs.

These were stories with titles like “The Adventure Of The Missing Mouse Ball”, “The Invigilator Substitution Scandal” and “The Case Of The Disused Classroom”. When I later went to university, I ended up writing another Richs & Coates story called “The Hound Of The Student Halls”.

I also briefly revived the series for three short comedy stories in 2013- 14 (set several years later, when Dalton Coates has become a Tory MP) – called “The Case of The Phantom Funds” , “The Case of The Uncertain Constable” and, my personal favourite, “The Case Of The Absent Snuff-Box“.

And, before any of my regular readers ask, Dalton Coates was one of the many inspirations for Harvey from my occasional “Damania” webcomic series: 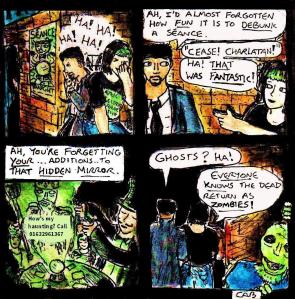 Anyway, Sherlock Holmes is is one of the easiest characters for comedy writers to parody. Still, if you want to write a Sherlock Holmes parody story and don’t know where to start, then here are a few very basic tips.

Depending on where you live, all or most of them are in the public domain and can be legally read for free on sites like Project Gutenberg. If you prefer reading traditional books, then it isn’t like modern reprints of Sherlock Holmes are that expensive (eg: if you’re in the UK, then the Wordsworth Classics and Penguin Classics editions of the stories are worth checking out if you don’t want to spend too much).

The reason why it’s important to read as many of the original stories as you can is because it’ll give you a sense of the narrative voice that Sir Arthur Conan Doyle used. After being exposed to tens of thousands of words of Conan Doyle’s wonderfully dramatic Victorian narration, you’ll get a good feel for it and be able to copy it fairly easily.

Reading the original stories will also show you a few of the techniques that I’ll be mentioning in this article, such as…..

2) Amusing case names: One of the cool things that Sir Arthur Conan Doyle did in his Sherlock Holmes stories was to have both Holmes and Watson talk about cases that never appear in any of the “official” stories (the classic example is the case of the “Giant Rat Of Sumatra”).

Doyle used this technique in a “serious” way in order to make Sherlock Holmes appear to be a more experienced character, to add more realism to his stories and to intrigue the audience. However, it is also perfect for comedy too.

If you want to add a bit of extra humour to your story, then just come up with a few hilarious – but intriguing- story titles and have Watson mention them briefly in passing. Eg: ‘I glanced again at Sherlock Holmes’ gaunt visage, his brow furrowed in stern contemplation. Not since the mysterious affair of the missing scones had I seen him in such a grave state.‘

3) Change the setting: Sherlock Holmes is a timeless character and this is why he has appeared in films and TV shows that have been set in time periods from World War Two to the present day. It is, theoretically at least, possible to set a “serious” Sherlock Holmes story anywhere and/or in any period of time.

However, there are some places where a Sherlock Holmes-style story would be hilariously silly (eg: a sixth form college, a supermarket etc…). If you set your story in one of these places, then the potential for comedy is endless.

A smarter way of doing this, which I used in my own parody stories, is to set the story in the modern day but to use the “Victorian” version of Holmes and Watson (or similar characters). It might just be my sense of humour, but there’s something absolutely hilarious about seeing Victorian characters in modern settings.

4) Deductions: One of the things that Sherlock Holmes is most well-renowned for is his deductions. This is where he can work out everything about something or someone through nothing more than careful observation. After deducing something, Sherlock Holmes always explains how he has done it. It doesn’t take a genuis to see the potential for comedy here.

For example, you could have Holmes say something like “But, my dear fellow, it is plainly obvious! The faded ink stains on your left hand indicate your recent enthusiastic perusal of certain illicitly-printed French lithographs. Likewise, the purple feather lodged in your hat brim could have only come from the feather boa of Madame Fioriana of the Burlesque parlour in Soho. I’d recognise that brand of mauve dye anywhere. Not to mention that the stench of cheap gin and opium smoke cannot be easily concealed by even the strongest cologne. It appears that you have had quite the night, Watson.”