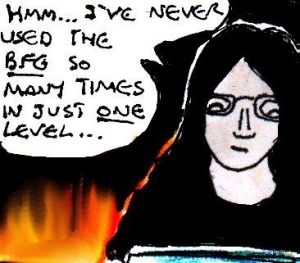 Well, although I’d originally planned to post this review earlier in the year, I ended up rescheduling it for various reasons.

Anyway, I thought that I’d check out a single-level WAD called “Infernal Fortress 2.1” for today. 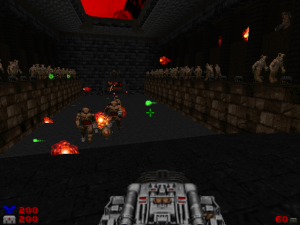 “Infernal Fortress 2.1” is a large “slaughtermap”-style level that took me just over an hour to complete on the “hurt me plenty” difficulty setting.

If you’re new to the wonderful world of “Doom” WADs, a “slaughtermap” level typically contains way more monsters than you can actually fight. As such, you have to rely on strategy, tactics, quick reflexes and a good knowledge of the ‘rules’ of “Doom” in order to complete the level.

I absolutely love these types of challenging and almost puzzle-like levels, but they can be something of an acquired taste. 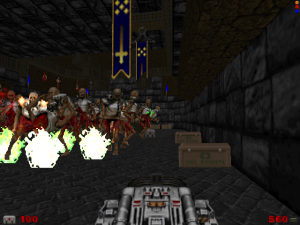 For example, here, you just need to keep this group of monsters at bay for long enough to run around them and flip a switch at the other end of the room before running away very quickly.

However, as “slaughtermap” levels go, this one is something of a mixed bag. Although some of the later parts of the level are enjoyably challenging, at least the first third of the level is ridiculously easy compared to other levels in this genre that I’ve played. 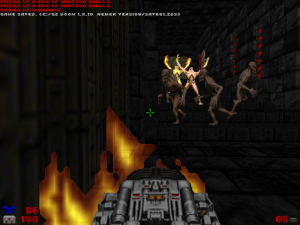 Of course, “easy” is a relative term. But, even this early part of the level isn’t as difficult as it might look if you know what to do.

Not only do you get all of the weapons fairly close to the start of the level, but health power-ups and ammo for the BFG are scattered very liberally around the level. What this means is that the BFG will probably be your primary weapon for most of the level.

In most well-designed “slaughtermap” levels, you don’t usually get these kinds of powerful weapons until later on – and ammo for them is also usually at least slightly scarce too. So, for this fact alone, this level is significantly easier than most levels in the genre.

Later in the level, this easiness is balanced out slightly by several enjoyably challenging battles that take place in claustrophobic areas – for example, you have to cross a monster-filled bridge above a pit of lava. Teams of mancubi are perched on nearby ledges and bombard you with fireballs when you’re crossing the bridge. At the end of the bridge, there is – of course – a cyberdemon. 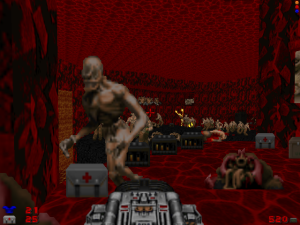 This over-abundance of BFG ammo and health items is also balanced out slightly by the fact that you encounter a new type of “boss” monster that takes quite a few BFG shots to fell. Even so, you only encounter these monsters in two parts of the level and they’re only a serious challenge the first time you encounter them, because the battle takes place in a relatively small room with only a few small pillars to hide behind: 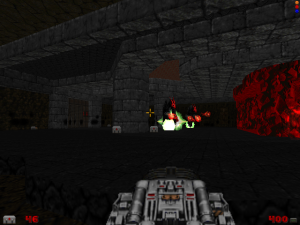 Ironically, fighting two of these monsters here is FAR more difficult than fighting 6-8 of them later in the level.

Even so, the inclusion of a new “boss” monster is a really cool touch and it keeps the gameplay varied and interesting. Apart from this, the only other new monster in this level is a variant on the “hell knight” monster that I’ve seen in a few other WADs. Still, the inclusion of new monsters is always a good thing.

Musically, this WAD is pretty cool. The MIDI background music is suitably fast-paced and it has a real 80s/90s rock music feel to it too 🙂

All in all, this isn’t the best “slaughtermap” level I’ve ever played, but it’s far from the worst either. This level would probably be improved by reducing the amount of BFG ammunition (and health items) given to the player but, despite this, it’s still a rather fun level and an enjoyable way to spend an hour or two.

If I had to give it a rating out of five, it’d probably get three and a half.