Well, I was in a “Doom” kind of mood again, so I thought that I’d check out an interesting-looking WAD for “Doom II” called “Nerves Of Steel v1.5” for today. Plus, a week or two before I posted this review, I also learnt that this WAD was made by the creator of “Strange Aeons“.

As usual, I used the “ZDoom” source port when playing this WAD and this is actually the recommended source port for this WAD too. Plus, although I’ve played the vast majority of this WAD at the time of writing, I’m completely stuck on one part of the final boss battle.

“Nerves Of Steel v1.5” is an 18-level WAD for “Doom II” featuring new weapons, textures, enemies, music and sounds, as well as a few very subtle gameplay changes too. The WAD itself is apparently also a re-make of an old FPS game from the 1990s called “Nerves Of Steel”.

However, as the WAD’s manual points out, this wasn’t a loving tribute to a forgotten game. Apparently, the maker of this WAD thought that the original game was so badly-made, that he wanted to make a better version using the “Doom” engine purely out of spite. Having never even heard of the original “Nerves Of Steel”, I can’t compare the two games. So, I’m judging this WAD on it’s own merits.

The WAD’s story is classic cheesy 1980s sci-fi action movie stuff. In the distant year of 200X, Japan has been taken over by a fascist dictator who has built an army of cyborgs and monsters in order to take over the world. It is, of course, up to a team of two elite American special forces operatives to stop him.

One of the first things that I will say about this WAD is that it actually allows you to choose a character. You can play as Gale Torrez or Bobby Storm, although this doesn’t really seem to affect the gameplay much (other than changing a few sound effects), I always love it when FPS games include multiple characters – so, it’s really cool to see it here.

Ooh, remember the days when EVERY FPS game had an episodic structure?

One other interesting thing about this WAD is that it uses a traditional 1990s-style episodic structure, with the game being divided into three six-level episodes.

This comes with the usual benefits and drawbacks that episodic FPS games are known for. Yes, each episode has a distinctive aesthetic and you’ll also get a large dose of 90s nostalgia too, but it also means that you lose all of your weapons every six levels – which can get annoying.

Unless, of course, you love the basic pistol. Although, as basic pistols go, this one is kind of cool.

In keeping with the traditional 1990s theme, jumping is disabled by default in this WAD too.

As for the level design, it’s really good. All of the levels are classic non-linear FPS game levels that are filled with intense combat and tricky puzzles (which require methodical exploration).

Although a couple of the levels can get a little bit visually monotonous, there’s a good variety of well-designed settings on offer here – from futuristic laboratories, to train stations, to rural fortresses, to old Japanese buildings.

Unfortunately, you can’t actually drive the train though. 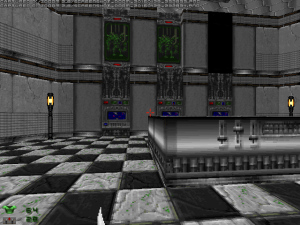 In terms of the difficulty, this WAD can be surprisingly challenging. Although it’s not quite the most difficult “Doom” WAD that I’ve ever played, don’t expect it to be anything close to easy after the first couple of levels. In fact, as I said earlier, I’m still stuck on the final boss battle at the time of writing (mainly since there wasn’t quite enough ammo in the level). So if, like me, you like your FPS games to be challenging, then you’ll love this WAD 🙂

Like any good FPS game, this WAD is filled with constant, frantic combat against a wide variety of powerful enemies. You’ll have to use tactics, strategy and perseverance if you want to get through some parts of this WAD in one piece. I really love WADs that are thrilling, but also make you think strategically at the same time and “Nerves Of Steel v1.5” doesn’t disappoint here.

Although some of the new monsters that you’ll be facing are ones that I’ve seen in other WADs (eg: the scientist zombies, the octobrain-style monsters etc...), there are at least a few all-new enemies that caught me totally by surprise. These include surprisingly powerful armoured stormtroopers that are armed with assault rifles and, later, automatic shotguns.

There’s also a modified version of the arch-vile who will shoot fireballs at you. There are ferocious attack dogs. There are merciless laser turrets. There are giant green cyborgs who can destroy you in seconds if you aren’t careful. There are also four new types of bosses too (although the first and final bosses are more powerful than the others).

They may LOOK like low-level enemies, but don’t underestimate these guys!

You will learn to loathe these laser turrets with a passion!

These new enemies really add some extra challenge and variety to the game, since they are often significantly more dangerous than you might initially expect.

However, these powerful enemies are balanced out slightly by a surprisingly badass arsenal of new weapons that you can use. Even the basic knife and basic pistol are surprisingly powerful, and they can fell many of the enemies surprisingly quickly. You’ll also find an assault rifle quite close to the beginning of each episode too. And then there’s the shotgun:

Seriously, this shotgun is a lot more impressive than you might think!

This is probably my favourite weapon in this WAD since, if you hold the left mouse button down, it will start firing continuously! Yes, you’ll run out of ammo after a few seconds but, wow! Just wow!

There’s also a slightly more dramatic version of the plasma rifle, there are hand grenades (although they’re a little bit clunky to use) and then there’s a significantly improved version of the RPG from “Duke Nukem 3D”.

Not only does it fire heat-seeking rockets (which also have a chance of hitting you if you aren’t careful) but, it can also be used at close range during combat too – since the rocket acts like a giant bullet when it hits the first monster it finds, before turning into a rocket again. However, it also has a slower rate of fire to compensate for these new features.

I just expected this to be a copy of the RPG from “Duke Nukem 3D”, but it’s SO much more than that!

As for the music in this WAD, I really liked it 🙂 There’s classic 80s heavy metal/rock music and there’s also dramatic 80s synth music. However, some of the level music can be a little bit on the generic side. Even so, there’s some surprisingly cool music in this WAD.

All in all, this is a wonderfully fun WAD which reminded me of how great FPS games can be. Yes, it has a few small flaws (eg: the final boss battle doesn’t contain enough ammo, a few of the levels can look a little monotonous etc..) but it’s a brilliantly cheesy, extremely thrilling, enjoyably challenging and just wonderfully retro WAD. If you need some convincing that 1990s-style FPS games are the very best type of FPS games, then just play this WAD.

If I had to give it a rating out of five, it would get at least four and a half.