As regular readers of this blog probably know, I’m a massive fan of Dave Gilbert’s excellent “Blackwell” series. Although I finally bought the fifth game in that series during a sale on GoG earlier this year (you can see my review of it here), I also bought a DRM-free download of another game by Dave Gilbert called “The Shivah” at around the same time.

Before I go any further, I should point out that I’ll be reviewing the revamped 2013 version of “The Shivah” here (although the original version from 2006, as well as the soundtrack are included as extras in the GoG version of this game ). At the time of writing, this game costs £3.49 at full price, although you can get it for less than £1 when it is on sale.

One minor technical point that I should also mention is that this game doesn’t run in fullscreen mode by default. So, if you want to play it in fullscreen, then you’ll need to select this in the “settings” program that comes with the game before you play, since there’s no way to change the screen size in-game.

I should also warn you that this review may contain some SPOILERS, but I’ll try to avoid major ones. 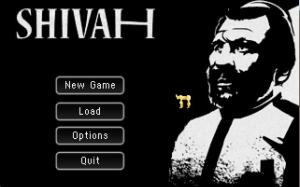 You play as Rabbi Stone, the rabbi of a small synagogue in New York that has certainly seen better days. After finishing a sermon early because the sole remaining member of his congregation has fallen asleep, Rabbi Stone retires to his office. However, it isn’t long before there is a knock on the door. 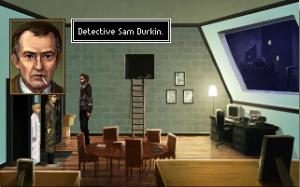 The Cantor tells Rabbi Stone that a detective wants to see him. It is none other than Detective Durkin (from the “Blackwell” games). According to Durkin, a former member of Rabbi Stone’s congregation has died and bequeathed him $10,000.

Although Rabbi Stone needs the money to keep the synagogue running, he feels morally conflicted about accepting it and, since Durkin has his suspicions about the bequest too, Rabbi Stone decides to investigate the matter himself….

Well, it’d be a very boring game if he didn’t.

In terms of the story of this game, it’s a reasonably good film noir-style detective story. However, the story is rather slow to start and the game doesn’t really start to get dramatic or thrilling until somewhere between halfway and two-thirds of the way through the story.

Again, it wouldn’t be a very dramatic game if the investigation didn’t ruffle a few feathers.

When the story finally picks up the pace, it’s almost as dramatic and compelling as the final “Blackwell” game is, which is to say that it’s very compelling. However, you have to wait quite a while to get to this point in the story and, thanks to the game’s short length (I completed it in about an hour and a half), the dramatic parts of the game don’t last that long.

As for the characters, they’re reasonably good. Due to the short length of the game, there isn’t a huge amount of time to seriously develop the characters – although this actually works in the game’s favour, given that it takes heavy inspiration from the film noir genre (where characters are often intriguingly mysterious). Still, you’ll learn a reasonable amount about some of the characters over the course of the game.

Interestingly, the villainous characters in this game are actually made more menacing by the fact that you get a few hints about their backstories, but the worst parts are mostly left to your imagination.

One cool thing about this game is that, although it isn’t a “Blackwell” game, it takes place in the same universe as these games do and there are at least a few subtle references and familiar faces. I love it when different stories take place in the same universe, so it was really cool to see this here. However, you don’t need to have played the “Blackwell” games to enjoy this one. 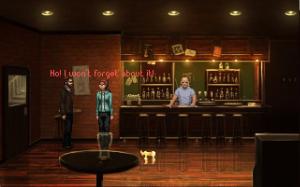 As for the gameplay, it was slightly more challenging than I expected. Although there thankfully aren’t any inventory puzzles, I had to check a walkthrough at least a couple of times. Like in the earlier “Blackwell” games, most of the puzzles are dialogue/clue based puzzles that require careful observation, deduction and internet searches.

Most of these puzzles are fairly well-designed and reasonably logical. They also fit in with the detective-based storyline of the game really well. So, be sure to read everything carefully, take notes during the dialogue and remember that the characters in this game are terrible at choosing secure online passwords.

In addition to this, one cool feature is that if you hold down the right mouse button, all of the hotspots in each room will be highlighted.

Yes, there’s no pixel hunting in this game 🙂

I’ve only even seen this feature in a couple of other adventure games and it can come in handy occasionally.

This game also includes an achievement system and, although this is a rather cool feature, the achievement notifications are fairly prominent and they can break up the flow and tone of the gameplay slightly (especially when a cheerful achievement message pops up after or during some sombre dialogue). 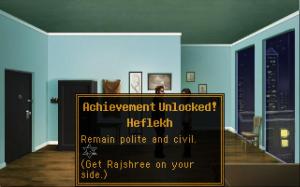 Yay! At least SOMETHING good has come out of this terse conversation with a mourning widow.

One interesting thing is that this game contains multiple endings and these are also slightly affected by some of your actions earlier in the game. When I played the game for the first time, I got one of the many bad endings. When I re-loaded a saved game and made some different decisions during the final scenes, I got another bad ending. It was only after I consulted a walkthrough and that I was eventually able to find the good ending. Even then, it took several attempts. Seriously, the ending is the most challenging puzzle in the game.

As for the religious theme of the game, I can’t really comment about how accurate the religious details are (and there are probably some religious/cultural references that went completely over my head too). But the game also includes some explanatory text too (eg: Rabbi Stone carries a Yiddish dictionary, which acts as a glossary for some of the dialogue.)

As for how Judaism is portrayed in the game – it’s portrayed in good, neutral and bad ways at various points in the game. Since this is a film noir-style game, many of the characters (regardless of their religious beliefs) are morally ambiguous in some way or another.

In terms of the graphics, the 1990s-style pixel art graphics here are fairly detailed and it’s always great to see this awesome graphical style in modern games 🙂

In terms of the voice acting, it’s reasonably good. The best voice actor is probably Abe Goldfarb, who does a fairly good job as Rabbi Stone. Plus, it’s always cool to hear him in a game (given that he voiced Joey in the “Blackwell” games). Rabbi Stone sounds like a fairly cynical guy, almost more of a classic detective than a religious leader.

The music in this game is reasonably good and it sounds totally appropriate for all of the settings and situations that you encounter. Peter Gresser’s soundtrack is also included with the GoG version of the game as a complimentary MP3 download too, which is a really cool bonus.

All in all, “The Shivah” is an ok adventure game. Although it takes quite a while to really get going, there are certainly some dramatic moments in this game and it also does the whole “film noir” thing fairly well too. It’s reasonably short and it isn’t perfect, so it’s probably best to wait until it’s on special offer if you’re unsure about whether you’d enjoy it or not.

If I had to give it a rating out of five, it would probably get three and a half.