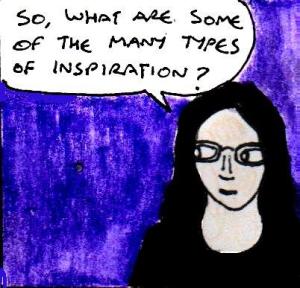 Well, since I wasn’t feeling that inspired when it was time to write today’s article, I thought that I’d talk about inspiration itself. Or, rather, the many ways that other creative works can influence the things we make.

First of all, I’m guessing that you probably know what some of your main inspirations are. After all, they’re probably the things that got you interested in making art, writing fiction and/or making comics in the first place.

Then there are the inspirations that only exist in translation. What I mean by this is when you find something in another medium that really inspires you. But since you have no skill, inclination and/ or talent for working in that particular medium – it ends up inspiring the things you can make instead.

For example, I’ve come up with more ideas for computer games than I can remember (thanks to being inspired by a lot of great games). But, I’m not a programmer – so, these ideas have occasionally found their way into my art, fiction and/or comics instead. Like in this sci-fi/comedy comic which was originally inspired by a really cool idea for a sci-fi/zombie game that I came up with whilst daydreaming one afternoon.

Then there are the role models. These are writers, artists, musicians, comedians, game designers, actors, actresses etc… that you think are really cool and who serve as an inspiration to you, even if you may not be interested in producing the same types of things as they do.

Then there are the inspirations that are specific to a particular period in your life. These are things that are a huge influence on you for a certain amount of time, but later become less inspirational (even though some elements of them might still appear in your current work). These influences are especially interesting, since they allow you to chart the progress of the things you make (eg: you can say something like “in 2009, my fiction was more inspired by [insert inspiration here]”).

Then there are the things that you define yourself against. These aren’t “inspirations” as such, but they still shape your work because they show you what you don’t want your art, comics and/or fiction to look like.

Then there are the inspirations that seemingly come from nowhere. Most of the time, these take the form of a sudden thought that usually involves combining two or three things that you think are really cool. These inspirations can also take the form of a sudden fascination with a particular subject, a moment of nostalgia or even an interesting emotion.

But, although there are many different types of inspiration out there, most of the times when you are feeling “inspired” will be the result of a combination of these things. Not only is this because of the way that our minds work (eg: they aren’t computers, where everything is neatly separated into different folders) but it’s also because it allows us to create “original” things.

Although there’s no such thing as a truly “original” work of art or fiction, virtually everything that people consider to be “original” is different for the simple reason that it has several sources of inspiration.

For example, my favourite film (and one of my main inspirations) “Blade Runner” is a perfect example of this. Although there was apparently nothing else quite like it when it was originally released, the film’s many inspirations are clear to see. Not only is it based on a novel by Philip K. Dick, but it’s also inspired by film noir, contemporary Japanese cities etc… too. It has many sources of inspiration and it became something stunningly original as a result.

So, yes, there are many types of inspiration – and it’s usually a good idea to use several of them at once.

3 comments on “Finding Your Main Inspirations – A Ramble”