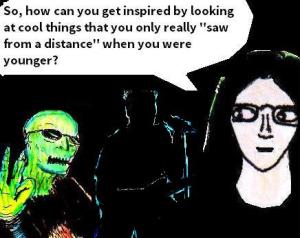 Well, for today, I thought that I’d talk briefly about one interesting way to get inspired. I am, of course, talking about remembering (and researching) cool things that you perhaps only saw briefly, only knew a small amount about and/or have almost forgotten about.

Chances are, the things that will give you this type of inspiration will be things that fascinated you when you were younger. When we’re younger, there are usually all sorts of barriers between us and the cool things that fascinate us. Things cost too much, we don’t know where to look for things, we’re in the wrong social clique, we’re too young to buy certain things etc…

We’ll catch glimpses of fascinatingly cool things but, for one reason or another, won’t get to experience them fully. Since we only see these things from the outside, and have little information to work with, our imaginations often have to “fill in the gaps”.

So, when we revisit these things years later and look at them in more detail, they can be a surprisingly potent source of inspiration. Since we’re already “used” to daydreaming and thinking about them, they can be the perfect thing to prompt further daydreams and inspiration.

One personal example of this sort of thing is probably 1980s/90s American punk music (especially from California). When I was a kid in the late 1990s (and before I discovered heavy metal), this was the coolest genre of music in the world to me.

But, apart from a few CD singles by The Offspring, I didn’t own that much music in this genre. Whenever I visited my cousins, I’d always spend at least an hour listening to their collection of punk CDs.

It was this amazing genre of music, and I only had a limited knowledge of it at the time. I saw it from a distance. Of course, in the years since, I’ve listened to a lot more of it, I’ve discovered a few more bands and I have at least a few more punk CDs than I used to.

Yet, to me, 1990s California punk music will always be this cool genre of music that I can use to get into a “cool” mood. To get nostalgic about the 1990s. To daydream about a time, a historical place and an old version of a subculture that I’ll never fully experience. All of this stuff is, of course, a great source of inspiration for me.

Another personal example is probably gruesome horror movies from the 1980s. When I was a teenager, I was a massive horror fan but – thanks to this country’s stupid film censorship rules – actually seeing decent horror movies was a relatively rare occurrence.

Sure, I saw a few gruesome horror movies when I was a teenager (and was often disappointed that they were less gruesome than the second-hand splatterpunk horror novels I read regularly were). But, for every cool horror movie that I actually saw, I’d notice about ten more even cooler-looking horror movies in the shops that I didn’t look old enough to buy. The irony was that, once I’d was old enough to actually buy all of these movies, I’d moved away from the horror genre slightly.

So, one way that I can feel inspired is by looking at the horror genre again. Reading about old horror movies, watching trailers for them and occasionally even watching the odd horror movie. The horror genre used to really fire my imagination when I was a teenager (since I didn’t see as many horror movies as I should have) and I can kind of rekindle that feeling when I want to get inspired.

Of course, the things that inspire you will be different from these two things. But, if you need inspiration, then it can be worth looking at the things that you could only look at “from the outside” when you were younger.