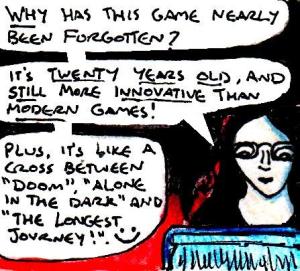 Naturally, I … forgot about the game until earlier this year when I happened to notice that it was on special offer on GoG.

At the time, the game was reduced to nearly 50p although, even at full price, this game is still a bargain. This game is also available on Steam (for about £7 at the time of writing), but the full-price GoG version is significantly cheaper (it costs a little under £5) and it also comes with a downloadable soundtrack, no DRM and a manual.

So, let’s take a look at “Realms Of The Haunting”:

Looks can be deceiving, this is more than just another FPS game…

“Realms Of The Haunting” is an interesting cross between a FPS game and a “point and click” adventure game. It was released in 1996/1997 and, even though it’s twenty years old, it’s still far more innovative, complex and unique than many games that have been released since. But, I’m getting ahead of myself – I should probably start by explaining the premise of the game.

The game’s long and complex gothic horror/fantasy story begins with a Canadian man called Adam Randall who has been experiencing a series of strange dreams that compel him to visit England and travel to the house of his late father in Cornwall (yes, this is the only game I’ve ever played that is set in Cornwall!). Shortly after Adam begins to explore the house, his father’s ghost appears.

In case you didn’t know already, this is a horror game.

Despite being a vicar who has led a fairly good life, he tells Adam that his soul is suffering the torments of the damned. Although Adam pledges to save him, he tells Adam that this is all part of something much larger and much more dangerous. After exploring further and finding secret passages and unearthly creatures within the house, Adam begins to believe him.

Not only that, a mysterious woman called Rebecca Trevisard suddenly shows up in one part of the house and offers to help Adam solve the mystery…

This is Rebecca, one of the best characters in the game. Although she doesn’t have an in-game sprite, she’ll often comment on things during gameplay.

I could spend several hours talking about the story of this game (and the characters) but, needless to say, this brief description only covers the events of the first couple of chapters.

Yes, like a book, this game is split into multiple “chapters” (twenty of them!). The level of depth and complexity in this game’s story can be compared to another game from a few years later called “The Longest Journey“.

Not only that, without spoiling anything, the game has an ending that will probably divide opinion. Although it wasn’t what I expected, it is certainly in keeping with the themes and tone of the game.

Although some of the story is relayed through in-game documents and in-game dialogue, the vast majority of it is relayed through FMV cutscenes. Although these are fairly low-resolution and occasionally feature cheesy 1990s low-budget TV show-style acting and 1990s-quality CGI, they still tell a very compelling story.

Thankfully, all of these cutscenes are fairly interesting, and none of them feel like lazy filler material. Plus, because they are all skippable (though you really should watch them), they never really break up the flow of the gameplay. Not only that, some of them even include interactive dialogue too:

However, if you skip the cutscenes, you’ll miss out on cool-looking stuff like this!

In terms of the gameplay, this is where “Realms Of The Haunting” really comes into it’s own.

For example, this part of the game reminded me a bit of “Serious Sam”, although it was made a couple of years earlier.

As I’ll explain later, the fusion of these different genres works surprisingly well during most of the game. However, the controls can take a bit of getting used to – since they’re slightly on the clunky side.

So, expect to move using the arrow keys, whilst also using the mouse to interact with things. Although you can use the mouse to fire your weapons, I’d recommend using the “ctrl” key instead (it’s less accurate, but more intuitive if you’ve played FPS games during the 1990s).

Some of the weapons can be selected using the number keys, but some will need to be selected in the in-game menu (which can break up the flow of the gameplay slightly).

This game also features, jumping, crouching and a limited vertical look system, where you can use the page up and page down keys to look up and down. Likewise, in order to access the in-game menu (to use items or save your game), you need to press the “i” key.

But, don’t let the clunky controls put you off, the gameplay is – for the most part – astonishingly good. Although some of the earlier FPS segments of the game are very slow-paced, this is balanced out by lots of intriguing exploration and early puzzles that are challenging, but solvable.

Later FPS segments are thankfully a bit more challenging, although they never cross the line into being unfair. But, don’t expect the same level of speed and intensity as “Doom”. Most of the challenge here comes from the strength of the monsters and the relative lack of health power-ups in the game. 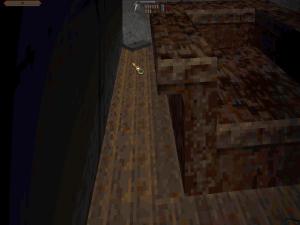 Health and ammo power-ups aren’t highlighted, so (like the pistol magazine in the corner of this room), they can be easily missed!

Even so, as long as you know when to take cover, when to fight and when to run, then you probably won’t have too much difficulty with these parts of the game. Even so, there are a few challenging boss battles but – if you’re smart enough (or have read some hints) – you’ll save the game’s most powerful weapon for the final two bosses:

This final boss battle took me all of two minutes, since I’d kept the most powerful weapon. Ironically, the boss battle BEFORE this one is significantly more difficult.

In fact, the array of weapons on offer here is surprisingly creative and varied. Yes, you’ll get the usual pistol and shotgun fairly quickly – but many of the game’s other weapons are magic-based weapons. These are powerful weapons and, with the exception of Florentine’s Staff (the game’s “BFG“), they have infinite ammo. However, this is tempered by the fact that you’ll have to wait for them to recharge between shots.

However, the best part of the game is probably the exploration that you will be doing regularly. The atmospheric and mysterious “world” of this game is absolutely huge and it’s up to you to explore all of it.

All of the game’s many settings look really cool and they also contain all sorts of passages, corridors, rooms etc.. that you will have to search. If, like me, you love games that require lots of exploration, then you’ll love this game 🙂

There are dramatic-looking outdoor areas here. 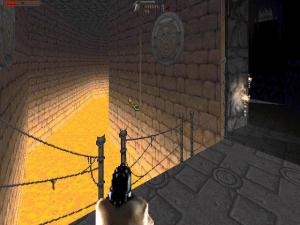 There are also more traditional “Doom”-style areas too.

Then there’s the mysterious inter-dimensional realm… I could go on, but there are a lot of distinct and interesting locations here.

If there’s one thing I love about both “point and click” adventure games and classic 1990s FPS games, it’s the fact that both genres encouraged the player to explore. So, the fact that exploration is such a huge part of this game is really cool 🙂

The only thing that I will say is that some maze-like areas take a very “realistic” approach to in-game mapping. Although you’ll receive a map before entering most of these areas, this isn’t a “Doom II”-style automap. It’s an actual document that you have to look at. Like a real map, it doesn’t contain any indication of where you’re currently standing. So, you’ll have to rely on landmarks and traditional map-reading to get through these parts of the game.

I didn’t have too much trouble with the maps but, if you aren’t good at map-reading, then these parts of the game will probably drive you up the wall..

The puzzles in this game are, for the most part, fairly good and there’s a good mixture of “traditional” puzzles, switch-based puzzles, inventory puzzles and gameplay-based puzzles.

Throughout most of the game, the puzzles are fairly logical and they only appear in contexts where you would expect them to appear. Although there are quite a few of them, you’ll get a decent break (for exploring and/or fighting) in between each puzzle.

Plus, in addition to manual item selection, the game also includes an auto-select system (where the game will automatically use the right item in the right place) which really helps to make the puzzles more enjoyable.

This is also useful when encountering many of the game’s locked doors. Since many of the keys you find are (realistically) unmarked, having the game automatically use the right key on the right door can save you a lot of grief.

As someone who is terrible at adventure game puzzles, I was delighted by the fact that I didn’t need a walkthrough for at least the first half of the game. However, the number and difficulty of the puzzles increases significantly in the later parts of the game.

This includes an area where you have to solve eight logic puzzles in order to progress. Even with the use of a walkthrough, I still had to draw several charts and spend about an hour and a half getting through this part of the game. 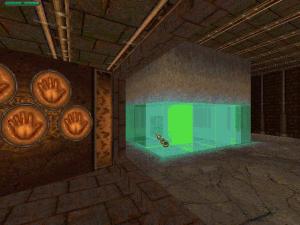 Although this game is amazingly cool, this segment of the game ISN’T. Even with a walkthrough, it can be very frustrating

Still, whilst these eight puzzles can seem slightly random and out of place, they are preceded by a wonderfully macabre puzzle that is much more appropriate for a horror game like “Realms Of The Haunting”.

In this segment of the game, you have to search a maze of H.R.Giger style tunnels in order to find sixteen gruesome brains that have to be fed into a creepy steampunk machine.

You’ll have to be quite BRAINY to solve this puzzle! Seriously though, I wish more of the later puzzles were like this one.

But, later puzzles aside, the mixture of all of the different types of gameplay in “Realms Of The Haunting” is handled really well. Seriously, it doesn’t quite feel like a FPS game or an adventure game, but like something that is greater than the sum of it’s parts. I really miss the days when games companies constantly tried new things and focused on creating innovative games.

The best way to describe the atmosphere and general style of this game is to imagine what a cross between “Doom” and “Alone In The Dark” would look like, if it was combined with the deep and complex story of “The Longest Journey”. If you’ve played any of these three classic games, then this alone should make you want to play “Realms Of The Haunting”.

Seriously, this game has a special quality to it that I’ve only seen rarely in computer games. Although the gameplay is incredibly fun, this game also contains a level of storytelling, atmosphere and depth that really makes it stand out from the crowd. If games were literature, this would be the Edgar Allen Poe, the Clive Barker or the H.P.Lovecraft of gaming history. And, yet, it’s faded into almost total obscurity.

Yes, with it’s clunky controls and occasionally frustrating puzzles, it isn’t a “perfect” game. But, damn, does it come extremely close to perfection! If you like FPS games, 1970s-90s horror novels, adventure games, the horror genre or even just good storytelling, then you need to play this game!

2 comments on “Review: “Realms Of The Haunting” (Retro Computer Game)”