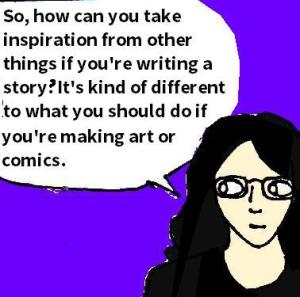 But, for the sake of simplicity I’ll start with explaining how to take inspiration from just one thing (even though, for a very good reason I’ll explain later in the article, you should have more than one inspiration!)

Unlike making art or comics, you have a slightly greater degree of freedom when it comes to designing the settings of your stories if you’re inspired by visual media (like films, comics etc…).

Although I am not a copyright lawyer and nothing in this article should be considered legal advice, one general principle of most copyright laws across the world is that they only protect highly-specific expressions of ideas, and not basic/general ideas and concepts.

Despite the oppressive and restrictive reputation that copyright has, it is designed to allow people to take inspiration, provided that they do something new and different enough with that inspiration.

For example, your sci-fi story can include a detailed description of a futuristic spaceship crewed by both humans and aliens. Your spaceship could also have faster-than-light travel, touchscreens on the walls and/or sliding doors between each room. These are all general ideas and concepts which no-one can copyright.

But you can’t call your spaceship the USS Enterprise. You can’t call the engine a warp drive. The alien crew members in your story can’t be called “Klingons”, “Vulcans”, “Andorians” etc.. Your spaceship can’t consist of a saucer with two engine nacelles attached to it. You can’t say that the touchscreens use the LCARS operating system etc.. Why? Because those are all highly-specific (and therefore copyrighted) details from “Star Trek: The Next Generation”.

Because the setting of a story consists of images translated into words (which are later translated back by the reader), you can actually make your setting descriptions relatively close to the images that have inspired you – provided that you don’t use highly-specific details!

The same holds true for characters too. In prose fiction, you can make your characters “look” similar to TV show, film, game etc.. characters that you like. You can even give them similar personalities too. But you’ll have to give them different names and different backstories. Again, general traits are a free for all, but highly-specific details are not!

Once you’ve got your answer, come up with a new (and different!) plot that also fits into that general category. It’ll still have the same atmosphere as the thing you’re inspired by, but you won’t be ripping anything off.

But, you might say, isn’t all of this bordering on plagiarism? Well, it is only borderline plagiarism (in the moral sense of the word, at least) if you take inspiration from just one thing. But, if you blend inspirations from as many things as possible, then you’ll ironically end up with something fairly original.

Going back to my “Star Trek: The Next Generation” example, if the main character of your sci-fi story is a bald man from Belgium called “Captain Ricard” then this might possibly technically be an original character – although everyone will probably realise that it’s a blatant rip-off of Captain Picard.

However, if you were to blend elements from other fictional characters (even ones from the same TV show, if you’re particularly lazy) – I don’t know, let’s say that Captain Ricard is also a telepath who has bionic eyes – then it’ll probably seem at least mildly more original. But, the more different things you blend and the more ideas of your own that you add to your inspirations, the more original it will be.

So, remember, taking inspiration is perfectly fine (as long as you avoid highly-specific details). But, the more inspirations that you blend together and the more of your own ideas that you add to the mix, the more interesting, distinctive and original your story will be. So, use more than one inspiration!