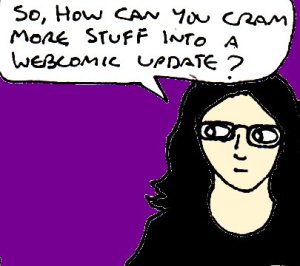 Well, although it won’t be posted here until late June, I finished making a short webcomic mini series a few hours before writing this article (which tells a short detective story in just six comic updates). So, I thought that I’d talk about compact storytelling in webcomics today. But, first, here’s another preview of the upcoming mini series:

The full mini series will start appearing here on the 25th June, but stay tuned for more mini series in the meantime

1) Plan it first!: One of the best ways to tell a lot of story in a relatively small space is to make a full plan of the comic first (eg: make very rough sketches of each update, including dialogue). If you plan out your comic before you make it, then it’s easier to see what can be changed, cut or moved around in order to free up more space.

For example, with the upcoming mini series, my original plans ended up looking fairly different from the finished comic. Some of this was because I’d come up with a better idea for the ending whilst making the comic but, mostly, it was because I was looking for ways to save space.

One example of this was that, in my original plan, one of the updates would have consisted of four dialogue-based panels. But, when I was making the comic, I realised that I could reduce the dialogue slightly and cram four small panels into the top half of one of my comic updates. This essentially allowed me to squeeze two comics into just one comic. Here’s a shrunken preview of the finished update, which shows the panel layout:

Thanks to looking at my plan and revising it, I was able to reduce the size of one planned update by half whilst only losing a minimal amount of dialogue.

If you can get a general overview of your comic before you start making it, then these kinds of changes are both considerably easier to make and easier to think of.

2) Panel size, formatting and layout: One of the easiest ways to cram more story into the same amount of comic space is to use a larger number of smaller panels. However, if you do this in the wrong way, it can ruin the look of your comic.

Generally, you should also try to include some larger panels too in order to avoid visual monotony (and to show off some interesting art too). For example, my current format for webcomic updates is to use an 18 x 18cm square that is divided into two horizontal “rows”. Usually, there are two panels on the top row and two on the bottom – like this: 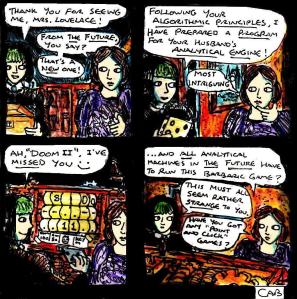 But, when I was trying to cram an entire detective story into just six of these “standard” comic updates, I followed slightly different rules. In order to avoid the comic updates looking too “squashed”, most of them have three panels in one row and two in the other. Like this:

This is how to sneakily add an extra panel to your updates, whilst keeping them the same physical size.

This also made them look fairly similar to a “standard” comic update, whilst also allowing me to add an extra panel. These extra panels can add up fairly quickly too 🙂

3) Know what not to show: This one can take a bit of practice and research (eg: read lots of comics, look at the editing in scripted TV shows etc..) to get right, but you can increase the amount of story in each webcomic update by knowing what not to show. In other words, you need to know when to let the audience’s imaginations “fill in the gaps” and when to actually show something to the audience.

For example, in the penultimate update of my detective comic, I included a small panel showing a police car driving towards the house that the comic is set in. In the final update, there’s another small panel showing a policeman arresting the culprit (after Harvey, the detective, has concluded the case). Yet, there are no pictures of the policeman entering the house or introducing himself to everyone.

Because the audience has seen the police car driving towards the house, the sudden appearance of a policeman several “minutes” later isn’t too surprising. And, yet, this whole part of the plot only takes up two small panels.