Woo hoo! I am very proud to present the fourth instalment of “Damania Recovery” a (hopefully) six-part webcomic mini series, where Harvey gets to solve another case (albeit a traditional “cosy” mystery this time). If you’ve missed the previous parts, then they can be found here: Part One, Part Two, Part Three.

If you want to see some of Harvey’s previous cases, then they can be found here, here and here. Links to many other comics featuring these characters can also be found here.

Yes, interviews might work for Poirot, but it looks like Harvey is going to have to rely on good old-fashioned Sherlock Holmes -style deductions again. But, who did it? Well, stay tuned for the next episode tomorrow (and the final one the day afterwards). 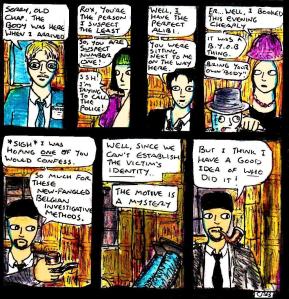