A while before I started writing this article, I ended up salvaging a failed painting using lots of digital editing. This painting was originally meant to be a 1980s-style cyberpunk painting, but it ended up looking more like something from the 1990s when I was finished with it. Here’s a reduced-size preview: 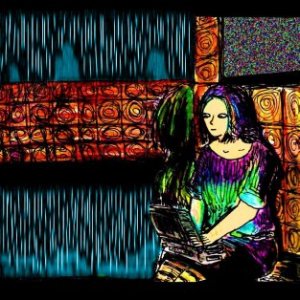 The full-size painting will be posted here on the 30th August.

So, after this, I thought that I’d talk about some more ways to make your art look like it’s from the 1990s (since I’m sure I’ve written about this topic at least once or twice before).

1) Cultural hangovers and old nostalgia: Nostalgia wasn’t invented in this decade. In other words, people were getting nostalgic for past decades (in a stylised way) during the 1990s too. Likewise, there was probably a bit of a cultural hangover from the 1980s too. So, one way to make your art look more 90s is to include things that are vaguely reminiscent of the 1960s-80s in your art, but to give them more of a 1990s-style twist.

In other words, make things from the ’60s and ’70s look slightly darker, use more high-contrast colour combinations and/or include gloomier lighting. Remember, the 1990s was a slightly nihilistic decade where it was fashionable for things to be “dark and edgy”.

As for things from the 1980s, include the occasional 80s-style thing (eg: jackets with shoulder pads, 1980s technology, floral dresses etc..), but try not to include too much of it.

For example, the lighting effect on the characte’s t-shirt in the art preview I showed you was originally meant to just be ambient lighting. However, once I’d finished the painting, I noticed that it looked a bit like a 1960s tie-dye shirt. However, like with the cover of Bad Religion’s “No Control” album, it has more of a 90s-style look purely because it’s contrasted with several dark parts of the image.

2) What was cool: One easy way to make your art look more ’90s is to try to remember what was considered “cool” in the 1990s. Then include it in your painting, depicted in a “cool” way.

For example, computers were still cool in the 1990s. The internet gripped the public imagination in both good and bad ways. For example, computer hackers were often portrayed as either cool rebels or scarily omnipotent figures in movies like “Hackers”, “The Net”, “Ghost In The Shell”, “The Matrix” etc.. rather than the mundane criminals that they are considered to be today.

So, although my painting was originally meant to be a 1980s-style cyberpunk painting (hence the ultra-bulky bulky laptop), the fact that it features a slightly “alternative” character using a laptop also makes the painting look a bit 90s too. After all, whilst someone using a laptop is a mundane thing these days, it was probably a lot more unusual and cool back in the 90s.

So, yes, search for things that were considered “cool” in the 1990s and then add them to your art in a cool way. Another good example of this sort of thing would probably be either skateboards or flip phones (although flip phones are probably more ’00s than ’90s).

3) Movies and TV: Because it’s still relatively recent, a “realistic” painting set in the 1990s may not always stand out as being “retro”. So, look to the more stylised world of 1990s movies and TV shows for inspiration.

The best things I’ve found are probably American movies and TV shows from the early-mid 1990s, for the simple reason that they look a bit more “old”. Plus, the 90s was a lot weirder and more interesting in American movies than it was here in Britain (then again, other countries always look more interesting in comparison to the ones you’re used to).

Once you’ve done that, stop watching and then try to create something similar (but different) from memory alone a while later. Working from memory helps to ensure that you don’t accidentally copy something verbatim, since memory is inherently unreliable. If you want more tips on how to take inspiration without copying, then check out this other article.