Woo hoo! I am very proud to present the first comic in my “Damania Relaxation” webcomic mini series. If you missed the ‘old-school’ mini series (where every comic was self-contained), then you’re in luck! If you want to catch up on other old-style mini series, or check out some of the more recent story-based ones, links to them all can be found here.

This mini series basically came about because I had a mild version of comic burnout after the last mini series, which required a lot more effort than I’d expected. After over a month without feeling the enthusiasm to make comics, I decided to ease myself back into comic-making gently by making an ‘old-style’ mini series.

And, yes, this comic is a parody of the iconic ‘red room’ dream scenes from “Twin Peaks”. During the hiatus between this mini series and the previous one, I’d vaguely thought about making a “Twin Peaks”-style mini series called “Damania Resort”, but the idea didn’t really go anywhere. Just as well, I guess. It works better as a one-off joke anyway.

Although, in retrospect, I’m kind of annoyed that I didn’t make a comic about Harvey meeting Agent Cooper since that would be one hell of an interesting meeting. And, no, Harvey’s personality wasn’t inspired by Cooper’s. He first appeared in my comics something like six years before I first watched an episode of “Twin Peaks”.

Since this is a parody/fan art comic, this comic update is NOT released under any kind of Creative Commons licence. 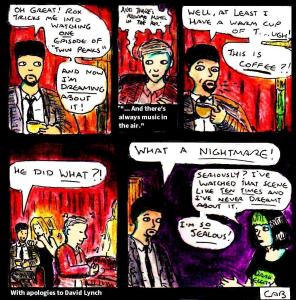