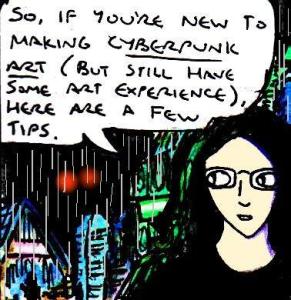 As regular readers of this site will probably know, cyberpunk art is my current favourite genre of art. But, if you’re interested in making cyberpunk art and have never made any of it before (but have some artistic experience), it can seem a bit confusing or challenging.

So, I thought that I’d give you a few tips about how to make cyberpunk art, which might be useful in combination with research into the genre. This article will, of course, only show you a few basic elements of my personal approach to making cyberpunk art – so, it’s worth looking at cyberpunk art from other artists in order to see other ways that it can be done.

1) Set it at night: If you look at most things in the cyberpunk genre, you’ll see that they take place at night (or during grey, gloomy weather). This is mostly because the cyberpunk genre often tends to take influence from the film noir genre, not to mention that gloomy locations help to reflect the “dystopian sci-fi” elements of the genre too.

But, more than that, it also means that the lighting in your painting will stand out a lot more than usual (in contrast to the gloomy backgrounds). So, even if you only know the basics of painting realistic lighting, then you’ll have a lot more opportunities to create a very atmospheric painting through the careful use of lighting (eg: you can do things like using a colour scheme for the lighting etc..).

Good light sources in cyberpunk art include things like computer screens, glowing LEDs, neon lights etc… Choose your light sources carefully, don’t include too many of them and place them well for maximum effect.

To give you an example, here’s a slightly rushed digitally-edited cyberpunk painting that I posted here a few days ago. The two main light sources in this painting are a red strip light and a green strip light (which is slightly out of frame). Most of the painting is fairly gloomy, but these light sources help to both highlight the important details and to give the painting a more distinctive colour scheme: 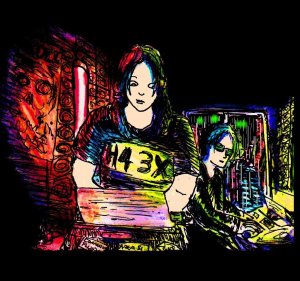 “Cyberpunk Typists” By C. A. Brown

In modern cyberpunk art, this harsh red/blue colour scheme is often softened slightly by changing it to a light blue/pink colour scheme (which occasionally includes purple and/or yellow too). Many great examples of this type of colour scheme can be seen in the online gallery of a pixel artist called Valenberg.

Here’s another example of one of my digitally-edited paintings that uses a version of this colour scheme: 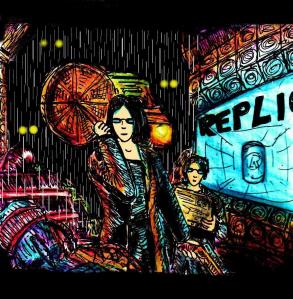 Basically, as long as you can draw 3D shapes and can draw objects in front or behind each other, then you can draw a basic cyberpunk cityscape. Just make the angular buildings slightly unusual shapes and add a few minimal details (eg: lines, rectangular windows etc..) and, since it’s in the distant background, it’ll probably look “realistic” enough.

If you’re feeling adventurous, add in the occasional large billboard or neon light too (this diagram will show you how to draw them). As long a cyberpunk background looks complex from a distance, you can get away with doodling and scribbling.

Likewise, if you add shadows or rain to the background (either traditionally or digitally), it can help to disguise the lack of genuine background detail too. Likewise, if you’ve got image editing software, then you can add a few pairs of headlights to the night sky (using an airbrush tool) to give your picture a more “futuristic” look with relatively little effort.

For example, here’s another digitally-edited cyberpunk painting of mine. Although there isn’t really much of a distant background in this one, you can see that the buildings consist of a simple pyramid and a few rectangles: 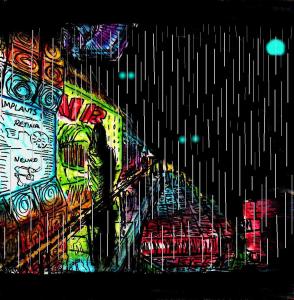