Well, in case you missed any of it, here are all six comics from my “Damania Resized” webcomic mini series 🙂 If you want to check out any of my other mini series, links to them (and info about future comics) can be found on this page.

This mini series was an absolute joy to make 🙂 Following the abject failure of the previous mini series (where I’d tried a “back to basics” approach), I was slightly reluctant to make comics again. So, I knew that I had to change something.

In the end, I settled on making my comics larger (but sticking with the self-contained “newspaper comic” format that I used regularly in 2016). The larger size also meant that I had to use a slightly slower production schedule, which actually increased the quality of the comics – both in terms of art and writing- and made producing them even more fun 🙂

In addition to this, I also experimented with using slightly higher-quality watercolour paper for these comics (despite all of the usual digital editing, the grain of the paper is actually noticeable in a few panels).

You can also click on each comic update to see a larger version of it. 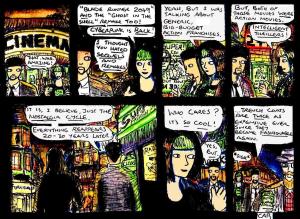 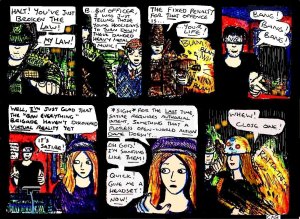 “Damania Resized – Progressive” By C. A. Brown [Note: This comic update is NOT released under any kind of Creative Commons licence] 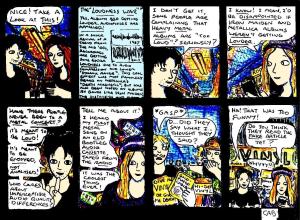 “Damania Resized- Fighting The Loudness War” By C. A. Brown 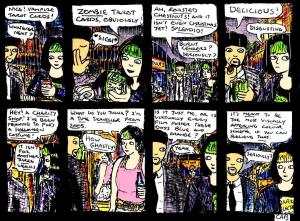