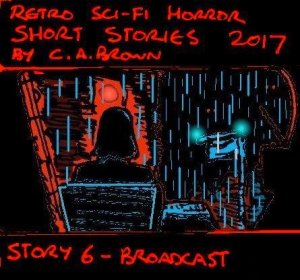 Stay tuned for the next short story tomorrow night 🙂

The grimy kiosk window glowed cherry red as another freight bus drifted gently into the distant blur of rain, night and safety lights. Inside the dingy kiosk, a green sign blinked quietly. Gianna let out a sigh – even arguing over a late access fee would at least have been a change of pace.

She looked down at the constellation of tiny bulbs on the desk in front of her. They were all green. She glanced at the countdown timer. There were four hours left before Martin would arrive. With the freight park at full capacity and no scheduled departures for a couple of days, it was going to be another quiet night.

Fumbling around in her jacket, Gianna pulled out a crumpled pack of cigarettes and lit one. The tip glowed volcano orange as she took a deep drag and fumbled through the pile of magazines on the edge of the desk. They hadn’t been replaced in months. There was only one thing left, she thought, public radio.

Sighing out a plume of bluish smoke, she cranked the dial on the battered old radio in the corner. For a second, there was nothing but silence. Clenching her fist, she gave the metal box a sharp tap. Instantly, the air was filled with crackling static as loud as the wash of rain on the tarmac outside. Just for luck, she gave the radio another tap, before turning the dial.

A soft voice filled the room: ‘…and then there’s the grenada sorbet. This is a real treat for the palate. I’m not like a critic or anything, but I’ve gotta love the flavours. There’s cochineal red, tartrazine, citric acid and just a hint of fructose syrup too. It’s a bit cheeky, but…‘

Gianna cranked the dial again. There was nothing but a dial tone. She cranked it again. An old man’s shrill voice thundered through the air: ‘… But, whatever happened to good old fashioned burlesque? I’ll tell you what happened to it – new puritans! Yes, that’s right! You heard me! It might not be the “correct” opinion, but these maladjusted metropolitan miserabilists…‘

Stubbing out the cigarette, Gianna cranked the dial once more. There was another dial tone. Was it such a boring night, she thought, that even the public airwaves were dead? Of course, a second later, her eye caught the calendar. Saturday. It was Saturday night. No wonder there were only cranks and weirdos on the radio. Or, at least, more than there usually were. Even the drunk-diallers probably wouldn’t get started for another couple of hours.

Just as she’d started to tune out the rhythmic chirping of the dial tone, a quiet click echoed through the room. A young guy with a northern accent said: ‘Hey there! I’m ten minutes late, but welcome to another episode of Game Report. Now, some of you have been writing to me about the new pinball machine at the Frog & Hounds and have I got a review for you! Think shiny chrome, little pink neon light tubes and a set of paddles to die for! Of course, it’ll cost you a whole credit…‘

‘Ninth time lucky.‘ Gianna muttered to herself as she gave the dial another twist. The air was filled with anguished howls, counterpointed crudely by the furious buzzing of an industrial saw. Above the cacophony, cackling laughter crackled through the air. Instinctively, Gianna’s arm shot towards the dial. It wouldn’t move.

The buzzing got louder. Then it stopped. Gianna rattled and tweaked the dial. It still wouldn’t move. The spiteful laughter grew louder. Clenching her fist again, she gave the radio a firm clonk. A piercing scream echoed through the room. She flinched. The laughter resumed.

Jumping to her feet, Gianna fumbled around for the electrical cord. By now, the industrial saw had started up again, faster and noisier than ever. Running her fingers along the rough rubber cord, Gianna reached into the darkness and gripped the plug. With a firm yank, she pulled it free. Sweet silence filled the kiosk.

It was only a few seconds later that Gianna realised that she couldn’t even hear the pouring rain outside. Even though she could feel her heart hammering in her chest, it was as quiet as a well-oiled piston rail. Nervously, she tried to hum a tune. Her lips vibrated noiselessly.

Crouching again, she scrabbled for the plug. Gripping it tightly, she slammed it back into the wall. In an instant, the world was noise. The drumbeat of her heart. The ticking clock. The barrage of rain. The buzzing industrial saw, angrier than ever. The cries of agony, as sharp as scalding water. And, behind it all, the laughing voice’s cruel cackling.

When Martin eventually arrived at the freight park, most of the police cars had already left. Beside the remaining car, the supervisor gestured wildly, his yellow mackintosh flickering red and blue. A portly detective shook her head.

As Martin rushed towards the car, he heard the supervisor say: ‘Well, I suppose you’ve got a better explanation! I tried to warn them all, you know. You listen to public radio for long enough and you’re bound to go a little crazy.‘

The detective just shrugged: ‘That’s as good an explanation as any, I guess.’