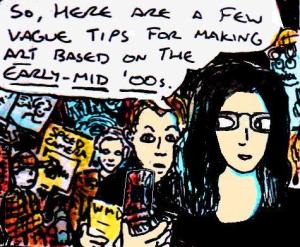 Well, since I seem to be in a nostalgic mood, I thought that I’d look at how to make art that is reminiscent of a time period which people haven’t really quite started getting nostalgic about yet. I am, of course, talking about the early-mid ’00s. Although this time period certainly wasn’t the best one ever, it’s starting to grow on me a bit after I re-listened to some music from back then recently.

1) Do your research: Knowing a bit about the time period you’re basing your art on is always a good idea. But, chances are, you probably remember the early-mid ’00s anyway.

Even so, it can be hard to crystallise it into a single stylised image for the simple reason that pop culture hasn’t quite decided what the defining features of the early-mid ’00s are yet (since, at the moment, cultural nostalgia as a whole has finally started reaching the 1990s 🙂 ).

But, if I had to define a “nostalgic” version of the culture of the early-mid ’00s (in Britain, at least) , then it would probably include things like:

– Disposable cameras being the best and cheapest way to take holiday photos etc…
– Punk music sounding “heavier” than it did in the 90s, and heavy metal music sounding gloomier and/or more filled with angst.
– VHS tapes and audio cassettes just about still being available in shops. DVDs were still excitingly new and shops still stocked CD singles 🙂
– That annoying “Crazy Frog” thing that seemed to be everywhere in 2004/5. He didn’t even look like a frog!
– Japanese-style horror movies (with lots of jump scares etc..) being the most popular type of horror movie in cinemas. The very beginnings of the resurgence of more extreme horror movies was starting too (eg: the release of “Saw” in 2004)
– Hollywood produced very few superhero movies, and popular culture wasn’t saturated with superhero-related stuff 🙂
– Emo hairstyles, moral panics about “chavs”/”hoodies”, and the appearance of “Boho” fashion.
– Brilliant satire about Tony Blair and George W. Bush
– Mobile phones (with monochrome screens and games like “Snake”) were virtually indestructible and only had to be charged weekly. Smartphones didn’t exist 🙂
– Geek culture was still slightly obscure, “nerdy” and “uncool”.
– It was a time when it was still just about cool to be “edgy”,”controversial”, “rebellious” etc…
– It was a time when “social media” meant things like internet forums, blogs, MSN Messenger etc… Plus, Twitter didn’t exist and Facebook barely existed 🙂

I’m sure you can think of some things of your own. But, if you can’t, then the things on this list might be worth researching online.

Thanks to the wider availablity of the internet and the founding of blogging sites and art sites like DeviantART, artists had far more opportunities to share their art. This meant that a lot of art and comics on the internet were a lot more “unpolished” or “low budget” (compared to print publications) because the people making them were still learning. Likewise, digital art tools began to become even more available to ordinary people during the early-mid ’00s too.

Plus, although anime and manga have existed for decades – they only really seemed to get seriously popular in the west during the early-mid ’00s. This art style is still the most popular one on the internet and this trend can possibly be traced back to this period in history (although I can’t be certain about this).

3) Wider context: If there’s one thing to be said in general about the early-mid ’00s, it’s that it was a time when the post-cold war idealism of the 1990s died. Mostly because of 9/11 and everything that happened afterwards.

Yes, it wasn’t as dystopian as the age of austerity, Brexit, Trump, ISIS, mass surveillance etc.. that would come later, but it felt more dystopian for the simple reason that everyone wasn’t so desensitised to it back then. This naturally had an effect on culture as a whole.

It was a fairly major culture shift in a lot of ways. Creative works in the early-mid ’00s were more likely to be more “serious” or more “topical”. A good example of this is probably the thriller genre. Back in the 1990s, the plots of novels and films in this genre tended to be loveably silly – the villians were often from made-up countries, their evil plots were cartoonishly absurd and there was a more jovial atmosphere. But, in the early-mid ’00s, virtually everything in the thriller genre tended to be a lot “grittier” and more “realistic”. Perhaps as a response to news stories about Guantanamo Bay etc.. depictions of torture in the thriller genre also suddenly became a lot more common too.