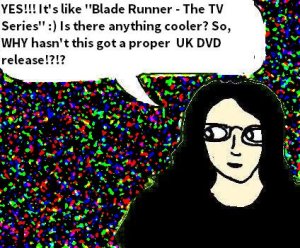 I can’t remember when I first heard of “Total Recall 2070”. But, once I’d heard of a Canadian TV series from the 1990s that looked like “Blade Runner“, I just had to watch it. There was only one problem – it bizarrely never received a UK DVD release.

Luckily though, a while before writing a review, I found a reasonably-priced second-hand US import DVD of the feature length pilot episode “Machine Dreams” on Amazon. Surprisingly, this episode was released as a stand alone straight-to-DVD film in the US.

So, I was curious to see whether even a fragment of this TV series was worth all of the waiting and searching. In a word, yes.

But, before I go any further, I should warn you that there might be some PLOT SPOILERS in this review. 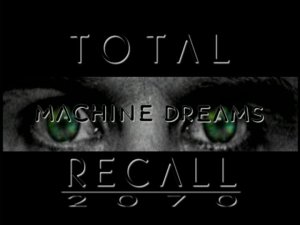 Yes, it even has the close-up eyes at the beginning, like “Blade Runner” 🙂

As you may have guessed from the title, “Total Recall 2070: Machine Dreams” is based on Paul Verhoeven’s 1990 cinematic classic “Total Recall” and it features both the recall machine and the nefarious Rekall corporation. If you’ve never seen “Total Recall”, it’s a film set in a cyberpunk future where a company called Rekall gives people virtual reality holidays by using technology to implant artificial memories into their brains.

“Total Recall 2070: Machine Dreams” follows trench-coat wearing detective David Hume and his partner, who are investigating a mysterious shooting at the Rekall facility.

And with that kind of moody lighting, you can tell that it probably isn’t going to just be a routine investigation…

After a gunfight with several rogue androids, the androids get away and Hume’s partner is killed – but the Rekall corporation don’t seem too happy about co-operating fully with the subsequent investigation.

Soon, Hume finds that he’s been assigned a new partner (called Ian Farve) and has been reassigned to desk duty.

On the plus side, Farve seems to be in his element behind a desk.

But, after an Eastern European woman with no prior criminal history and no apparent motive is arrested for kidnapping, there seem to be some strange elements to the case that prompt Hume and Farve to investigate further…

Since “Total Recall” and “Blade Runner” are both based on stories by Philip K. Dick (eg: “We Can Remember It For You Wholesale” and “Do Androids Dream Of Electric Sheep?” respectively), “Total Recall 2070: Machine Dreams” takes a lot of influence from “Blade Runner” too.

Yes, this is pretty much “Blade Runner – The TV Series”! Again, why didn’t this entire TV series, or even just the pilot, get a UK DVD release?

For example, this scene is a really cool homage to “Blade Runner”, although the events of it play out somewhat differently….

However, that said, this is bascially “Blade Runner lite”. In many ways, this is more of an amazing sci-fi noir detective thriller than a slow, contemplative, intellectually deep masterpiece. The plot of this film contains a certain level of complexity, but it’s a lot more “streamlined” than the plot of “Blade Runner” is. If anything, the pacing and plot of this episode reminded me of a cross between an “ordinary” detective movie and an episode of “Ghost In The Shell: Stand Alone Complex“. Which is never a bad thing!

Thankfully, although the episode quite obviously sets the scene for a larger TV series, the film’s story is (mostly) self-contained. Yes, there are a couple of small plot threads that are left hanging, but there aren’t really any major cliffhangers. The main story of the episode is resolved by the time that the credits roll. Likewise, the US DVD thankfully seems to be free from any puritanical American TV censorship too.

The acting in “Total Recall 2070 – Machine Dreams” is reasonably good and is what you’d expect in a TV show or low-mid budget movie. Hume is your typical weary and cynical film noir detective character and many of the other characters are fairly well-acted too. But, the stand-out character in the episode has to be Ian Farve, who manages to be both subtly amusing and intriguingly mysterious at the same time. 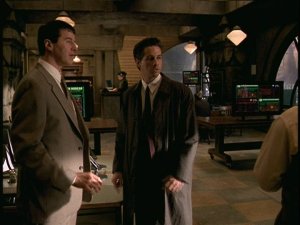 Although, if you’re a cyberpunk/ sci-fi fan, Farve’s personality and demeanour is probably a plot spoiler in it’s own right.

The set design in “Total Recall 2070” is surprisingly good too, considering budgetary limitations. Yes, the film contains a few (surprisingly good) examples of late 1990s CGI landscapes, a few “futuristic” locations that look like something from “Red Dwarf“, a few scenes set during the day and a few repurposed “ordinary” building interiors. But, there are also some truly spectacular set designs here.

In particular, both the interior of the police station and the street outside look like something from “Blade Runner”.

Yes! The set of EVERY TV show should look like THIS!!!!

Seriously, this is a TV series that looks like “Blade Runner”. WHY don’t we have this show in the UK?!

Yes, the street location is re-used for quite a few scenes but it’s busy, visually complex and atmospheric enough to stand up to a fair amount of screen time. Likewise, the police station gets the whole “cyberpunk noir” aesthetic right in quite a few scenes – with stone carvings and pillars, an array of glowing screens and lights, a gloomy atmosphere and lots of interestingly-shaped windows. It looks really cool: 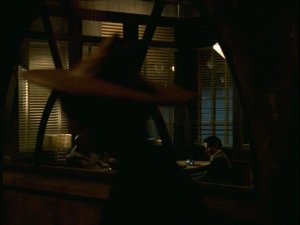 Plus, it gets the “ordinary film noir” thing right too. There’s even someone with a trilby hat!!

All in all, this episode is amazing! Yes, it isn’t quite as good as “Blade Runner”, but it’s still probably one of the coolest pilot episodes that I’ve seen! It’s dramatic, atmospheric, visually spectacular, thrilling and filled with cyberpunk goodness 🙂

Yes, it’s as much an ordinary detective thriller as it is a sci-fi film, but no doubt that the sci-fi elements are probably expanded on during the rest of the TV series. My only real criticism of it is the lack of a UK DVD release of the entire series! Seriously, this shouldn’t be some kind of obscure single-DVD US import. It should be a large, well-worn boxset on my DVD shelf!