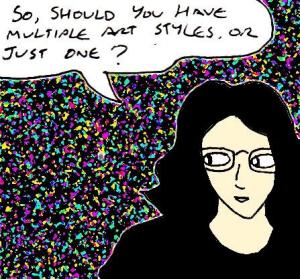 A while before I originally prepared this article, I happened to watch the final episode of the BBC’s “The Big Painting Challenge”. One of the interesting things about the episodes was that the tutors often seemed to try to get the artists to paint in different styles. For example, in one part of the show, they deliberately gave a couple of the artists larger brushes than they were used to working with.

And, this made me think about my own art. In particular, how incredibly annoyed I would be if someone tried to get me to make art in a style I wasn’t accustomed to. This might be a slightly old-fashioned view, but part of being an artist is finding, developing and refining your own unique style.

Yes, there’s nothing wrong with being influenced by other styles (in fact, being inspired by several different styles is essential if you want a unique style) , but the idea that an artist should be some kind of robot who can paint or draw in literally any style just seems kind of wrong.

An artist’s style is kind of like their handwriting, it’s a slightly unique and personalised way that an artist conveys information to an audience. It’s something that has developed organically over time in accordance with the artist’s own preferences and sensibilities.

For example, my own style is rather cartoonish (inspired by various western cartoons and some elements from anime/manga art). I tend to work best with drawing-based mediums (eg: I only started painting after I discovered watercolour pencils. Traditional painting would seem ludicrously imprecise to me). I also prefer making smaller works of art relatively quickly. I like to make art using a mixture of traditional and digital tools.

Likewise, I tend to use a slightly limited colour palette these days (inspired by the use of colour in these “Doom II” levels) and, for quite a while, I’ve had a rule that at least 30-50% the total surface area of each of my paintings must be covered with black paint (since it creates a high level of visual contrast that looks really cool). This is a style that I’ve spent several years developing and it’s a style that will probably gradually change slightly as time progresses.

But, even in the days where artists were only expected to make realistic portraits, or realistic paintings about historical and/or religious subjects, artists still managed to have their own unique styles. For example, Da Vinci’s “The Last Supper (1498)” is a world apart from Caravaggio’s “Salome With The Head Of St. John The Baptist (1607)”. Yes, these two “realistic” religious paintings were made a little over a century apart, but they both come from an age where attitudes towards art were more traditional and restrictive. Yet, each artist still had their own unique style.

So, an artist’s style is an important thing. It’s the thing that makes the work of an artist instantly recognisable.

I don’t know, this whole attitude reminds me of how – in the past – many people were trained to write in various formal types of script. Yes, they look very ornate and fancy, but you can’t really tell who wrote anything. It’s as impersonal and anonymous as the computer font that this article is displayed in.

Yes, when I’m not using block capitals for lettering in comics/cartoons, my handwriting looks like a series of tiny, barely legible scribbles (and, yes, I’m left-handed). But, this is the style of writing that tends to work best for me, it’s the type of writing that feels quick and spontaneous. I love how I can cram lots of writing into a relatively small space and how, if I write really quickly, my writing has an extra level of privacy to it since I’m often the only person who can decipher it. It’s a style of handwriting that developed because it was right for me.