Well, although it’s a little on the late side of things, I thought that I’d review this year’s Christmas episode of “Doctor Who”.

So, let’s take a look at “Twice Upon A Time”. Needless to say, this review will contain some SPOILERS.

“Twice Upon A Time” begins with a recap… of an old episode from the 1960s starring William Hartnell as the first Doctor.

Yes, if you were expecting a recap of the ending of the series from earlier this year, you’re in for a surprise…

Dying, he stumbles out of the TARDIS into the South Pole whilst displaying a Churchillian level of determination to stay alive. However, much to his surprise, he meets the current Doctor (who is also dying) – but doesn’t recognise him.

As they begin to talk, the falling snow around them suddenly freezes in the air. A rather confused WW1 officer then interrupts their conversation. It quickly becomes obvious that something is wrong with time itself..

Don’t worry, I’m sure that Baldrick has a cunning plan…

As you would expect, this is an episode about memory and death. A lot of the episode’s story revolves around whether our memories make us who we are. Not only is this shown in the many humourous and dramatic interactions between the two Doctors, but the premise of the episode also allows for a few appearances from familiar characters from earlier in the show (eg: Bill, Clara, Nardole etc..). And, in a lot of ways, the episode’s theme of memories also reminded me a little bit of both “Blade Runner” films. Which is never a bad thing 🙂 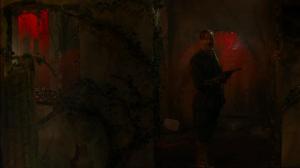 Of course, “Blade Runner” isn’t the only thing this episode reminded me of. This scene contains a brilliant parody of and/or homage to “Alien” too 🙂

Another cool thing about this episode is that time travel is a really central part of it. Although the entire show revolves around time travel, it is often more of a background detail or an excuse for the characters to be somewhere interesting. This episode, on the other hand, is all about how time affects people. A lot of the episode’s story revolves around the complex interactions between the past, the modern age and the distant future – and this is handled really well.

Such as this brilliant little moment when a man from the 1910s finds a piece of 1980s/90s technology whilst standing inside a time machine from the distant future.

The episode also approaches the topic of death with the high level of maturity, complexity, compassion and humanity that you would expect. The episode is also something of an exploration of the fear of death too (albeit in a somewhat stoical and understated way). Seriously, I cannot praise the writing in this episode highly enough.

For example, whilst these two characters are obviously the first Doctor’s companions, I have no clue what their names are etc….

The characters in this episode are absolutely brilliant. Although William Hartnell’s version of the Doctor is obviously played by another actor, he certainly seems like a character from an old TV show.

He’s a grumpy, patronising and stubborn old man – who somehow manages to be both steely and Churchillian, yet hilariously old-fashioned, at the same time. He could have easily turned into a caricature, but he comes across as a character who is both set in his ways and yet highly inexperienced at the same time. It’s a really difficult balance to get right, and the episode nails it perfectly. 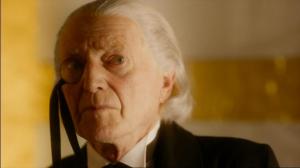 Plus, he even wears a monocle at one point too.

Likewise, the WW1 officer in the episode is also a more nuanced character than he appears to be. Although he is something of a typical “stiff upper lip”-style character, he doesn’t really stray too much into the realm of Blackadder-esque caricature most of the time, and he comes across as a surprisingly nuanced and complex character.

The Doctor and Bill are, as you would expect, the same excellent characters as they have been for the past couple of series of the show too. And it is great to see them getting a proper ending to their story (as opposed to the “deus ex machina” ending of series ten):

Yay! There’s some proper resolution to this chapter of “Doctor Who” 🙂

Jodie Whittaker’s much-anticipated appearance as the next Doctor is also a really cool moment. The scene in question is dramatic, funny (eg: the Doctor’s amazed reaction when she looks in a mirror) and is quintessentially “Doctor Who”. But, it is literally just a moment. This awesome scene is over within the space of about a minute… and with a cliffhanger ending too! 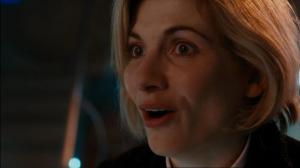 And, in contrast to Capaldi’s gloomy portrayal of the Doctor, Whittaker’s Doctor seems to be more of the eccentric and/or cheerful David Tennant/Matt Smith school of Doctoring. Well, this is what I guessed from the few seconds she actually appeared for… 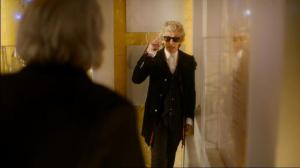 Seriously, this is the best “ending” episode that I’ve seen 🙂

The set design and lighting in this episode are brilliant too. Not only does the episode sometimes use lighting to create atmospheric colour schemes (eg: red and blue, blue and orange etc..) but there’s also lots of beautiful chiaroscuro/ tenebrist lighting here too. Seriously, the lighting in some scenes looks like something from a Caravaggio painting 🙂

Yes! THIS is how to use lighting 🙂 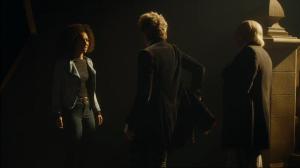 Seriously, this scene could almost be a Caravaggio painting!

However, this episode does have the annoying modern habit of using lots of lens flare sometimes….

This is also complemented by some brilliant set design too, with many of the episode’s locations evoking a theme of oldness, bleakness and/or decay. 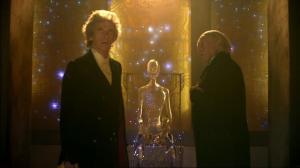 The episode’s special effects are also reasonably ok too. Although the CGI effects are sometimes a little bit obvious, this doesn’t really matter as much as you might think since the story of the episode is so gripping that you’ll probably be willing to overlook any minor flaws with the effects. I mean, it could have 1980s special effects and it would still be a compelling episode.

Yes, some of the CGI effects look like something from at least a decade ago. But, the story is so compelling that this doesn’t matter.

All in all, this is a brilliant way to end this era of the show. This episode is poignant, funny, dramatic, spectacular, intelligent and visually brilliant. My only real complaint about it is that the scene introducing the new Doctor was far too short.

If I had to give it a rating out of five, it would get a five.

4 comments on “Review: “Doctor Who – Twice Upon A Time” (TV Show Episode)”