Woo hoo! Inspiration! This digitally-edited painting was kind of an interesting one. Originally, I’d planned to make a gloomy and slightly minimalist painting based on some wonderfully atmospheric rainy weather I’d seen a few hours earlier. But, as I started sketching, I thought of the street scenes in “Blade Runner” and decided to start painting a dense cyberpunk city. But, then it kind of turned into a strange vaguely post-apocalyptic cyberpunk seaside town instead. 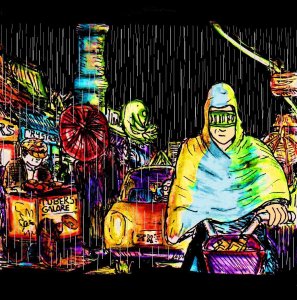